Three Observations: Becton, Mims and a Potpourri of Quick Hits 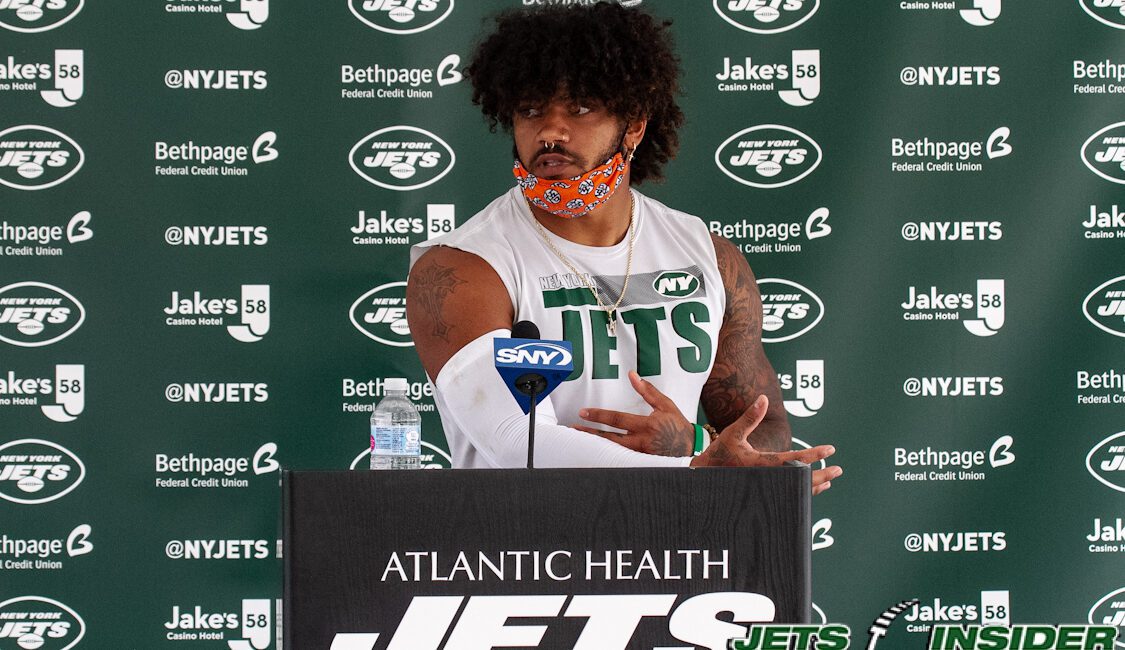 Pardon me while I get this off my chest. Good lord, it was way too hot out today. That’s it. I’m done. Onto the Jets and we’re jumping right into today’s observations.

One of the stories of camp has been the play of Carl Lawson. But because of how the world works, it has turned into a discussion on Mekhi Becton. Understandable to an extent, but of course the conversation has gone too far. It always does. Few padded practices, new offensive system, Lawson is just a bad matchup for Becton. Are just a few of the explanations for Becton’s “struggles” versus Lawson. Well, today Becton flipped the script and won the day. Lawson had his moments, it wasn’t a complete shutout but Becton won far more than he lost today.

Early in 11-on-11s, Becton exploded out of his set and into a heavy kick outside to set himself up for Lawson off the edge. Becton managed to shield Lawson off and push him far enough up and out that Zach Wilson could step up in the pocket and let a pass rip. On the very next play, Lawson switched it up. Lawson charged right into Becton’s chest then tried to slide inside but Becton got his paws on Lawson and moved him out of harm’s way. Those two plays set the tone for the day for the second-year tackle. Lawson was able to break through a couple of times, but this was Becton’s best day of pass protection this camp.

Good days. Not great, not spectacular but good. Yesterday Mims’ had his worst play of camp, but still had his best day of camp at the time. He was open on a crosser and bobbled a catchable ball which led to an interception. But the rest of the day was really solid. Today was simply solid all the way through. He’s beating his man far more often than not. Yesterday he had a 40 yard reception down the sidelines, today about a 30-35 yard reception down the sidelines. Today’s long reception came off a Mike White throw with Jason Pinnock in coverage. Mims had Pinnock beat, White put a touch too much on it but Mims extended his arms, secured the ball with his fingertips and somehow kept his stride.

He had a couple other short receptions and one play that could be called a drop only if you’re being incredibly harsh. It was during red zone 7-on-7s, Mims had his man beat as he ran to the corner pylon but the quarterback was just a touch late on the throw. I think the quarterback was White, but I forgot to clarify that in my notes. Jackson (I thought it was Lamar Jackson at first but I forgot about Bennett Jackson so it was one of them) had the coverage. Jackson was beat but being a red zone drill the window was tight and the quarterback just missed the window. Mims almost made a miraculous but couldn’t get his second foot down.

Mims spoke after practice and reminded reporters that he had a bad bout with food poisoning this offseason. He said he had some bad salmon and dropped 20 pounds. He went from 217 down to 197. Now he’s back to 208. The talk of him getting cut was always ridiculous. It sounds even more absurd now. Weight loss or not, he was taking longer to adjust to the new system. But he certainly seems to be catching up now.

3) A POTPOURRI OF QUICK OBSERVATIONS: