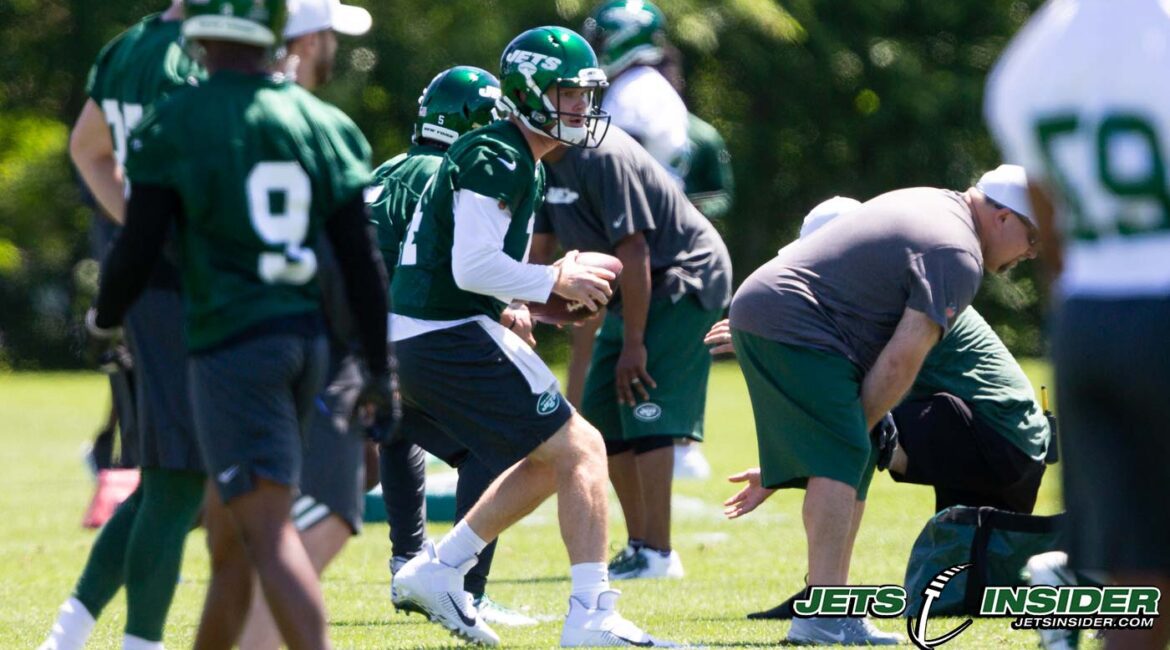 Congratulations, Jets fans! For the first time since Mark Sanchez the Jets go into training camp without a starting quarterback competition. Sam Darnold will be the opening day starter and he is good enough to hold onto that position throughout the entire season and next. What a weird, but great, feeling this must be for for the fans.

With a little over two weeks until training camp we will go through each position and give a preview of the training camp battles that are just around the corner and we’ll start here at quarterback to get it out of the way.

We know Darnold will be the Jets starting quarterback, there’s simply no doubt about it, but who will be the backup? Will Adam Gase keep three quarterback? And if so, who will win the third-string job? And who won’t make the Jets roster?

The battle here is between, Trevor Siemian (nicknamed T-Money Sizzle according to Pro Football Reference), Luke Falk and Davis Webb. Only one of them has NFL playing experience and is the heavy favorite to win the backup job and that’s T-Money Sizzle.

As a starting quarterback, T-Money Sizzle (and yes, I just learned of this nickname now and will never stop using it) has a record of 13-11, completed 59.3% of his passes for a total of 5,686 yards (6.8 yards per attempt), 30 touchdowns and 24 interceptions. Good ol’, T-Money Sizzle was drafted by the Denver Broncos with a seventh-round pick out of Northwestern University in the 2015 draft and has actually turned in some competent to slightly above average games as a starter in the NFL. Of course he also has his share of incompetent games in the NFL as well which is why he will only be competing for a backup role for the rest of his career.

Then there’s Davis Webb, who was drafted out of Cal by the Giants in the third-round of the 2017 draft. Webb has yet to take a snap in a regular season game and was released by the Giants last year after the preseason. The Giants drafted Webb hoping that he could develop into a starting quarterbacks to take over after Eli Manning retired, but then they drafted Kyle Lauletta in the 2018 draft which made Webb expendable.

The final competitor for a roster spot is former Washington State quarterback, Luke Falk. Falk was drafted by the Titans in the sixth-round of the 2018 draft before ending up with Gase in Miami then a quick stint in the now-defunct AAF. Falk never played in Tennessee or Miami so there’s not much to draw on, but his familiarity with Gase and his system should give him the leg-up over Webb.

This battle actually feels really easy to project right now. Obvious an injury could come and mess things up but assuming all these quarterbacks stay healthy T-Money Sizzle should easily win the backup job. He has actual in-game expect in this league and if he has to come in to try and save a game, or start a week or two, due to an injury to Darnold, he would give the Jets the best chance to squeeze out a win. On top of that a backup quarterback’s job is, of course, to be ready in case their number is called but it’s also to help prepare the starter each and every week and because of his past experience in the NFL he is by far the best suited for this role. If Darnold were to get hurt and miss any significant amount of time the jets season is doomed anyway, none of these other options will be good enough to save the season but T-Money Sizzle is absolute best suited to help Darnold throughout the season and step in in a pinch if needed.

It’s entirely possible the Jets only keep two quarterbacks on the final-53, with all the help they need at addressing other positions (OL, corner, safety and receiver depth) it would certainly make sense to free up an extra roster spot to use for depth at one of those positions. But if Gase does decide to keep a third quarter you have to think Falk’s familiarity with Gase’s system gives him the advantage of Webb. There wasn’t enough good or bad shown from either during OTAs to get a feel for which player is better, neither has any NFL playing experience so naturally we will have to see how training camp and the preseason plays out, but the smart money would be on Falk as the third-string quarterback if there is a third-string quarterback with the even smarter money on the Jets only keeping Darnold and T-Money Sizzle.