JetsInsider.com > News > Blogs > What A Difference A Run Makes!

What A Difference A Run Makes! 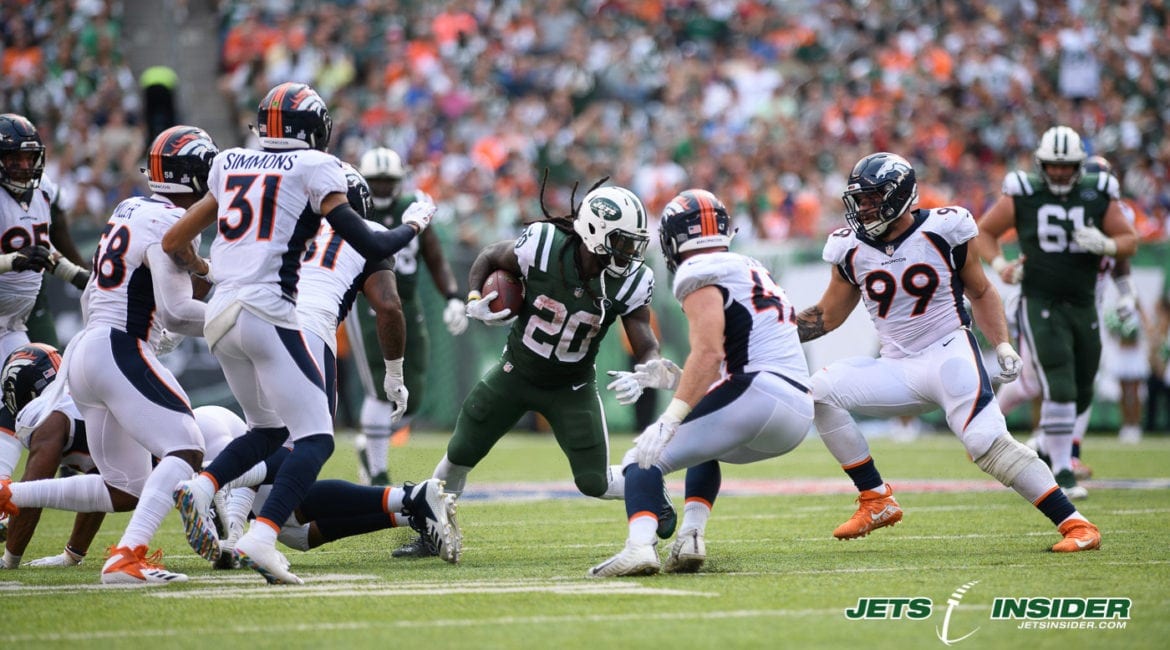 Florham Park, NJ – With the Jet’s second possession of the first quarter in Sunday’s game against the Denver Broncos, Sam Darnold handed the ball off to Bilal Powell who fumbled on the Jet’s 20-yard-line. The Broncos would go on to score six on a great diving catch by Courtland Sutton in the end zone. You can see the naysayers thinking “Same Ole Jets”.  But Darnold, with the help of the rushing game would drive the team back down field to the 12-yard-line. The drive would stall when Jermaine Kearse was manhandled going up for a pass in the end zone and with the Jet’s luck, no penalty was called. The on-field camera pans to the look of utter distain on Bowles’ face only to be followed up with a look of total disgust when Jason Myers hooked the kick wide right, missing a chip shot at 30 yards.

But Isaiah Crowell was having none of it. On their next possession, Crowell would take the ball outside and make a cut back faking out Darian Stewart and Bradley Roby for a 77 yard touchdown. What a spark for the Jets. It was like a doctor shocking a dead patient to life. The team was instantly converted to a playoff caliber team on all sides of the ball. Running backs were ripping off big yardage plays, the offensive line was opening up gaping holes, Robby Anderson was running by the safeties and cornerbacks for big catches. The defense was holding, especially on third downs, Darnold was laying the ball up perfectly into the outstretched arms of his receivers and Leonard Williams was sacking the quarterback again. Even Marcus Maye on the last play of the game intercepted a ball three yards deep in the end zone only to run it out for a picks six. Unfortunately, he ran out of gas and was brought down on the Jet’s one-yard-line. All it took was an unbelievable run by Crowell to the house to bring this team to life.  Even he was inspired by his own run. On five different plays he ran for more than 15 yards with three plays over 35 yards. Crowell finished with a total of 219 yards, a career high for him in one game, and averaged 14.6 yards a carry.

How did Crowell’s run energize the Jets? For one thing, it was nothing like the prior week when Jacksonville did not allow the Jets to even come close to those numbers in rushing. The Jets only had 34 yards of rushing on 14 attempts. But this time, the Jets relied more on the running game than on the passing game, looking like the 2009 Jets.

Darnold finished 10 for 22 with three touchdowns, one interception and 198 yards. He took his chances with a lot of long passes instead of check downs and was able to find Anderson three times in the game who racked up 123 yards and two touchdowns. Darnold looked comfortable with enough time to make decisions in the backfield, not being constantly rushed. He showed flashes of what the Jets will look like in the future as their franchise quarterback. The offensive line really gelled looking like the line in the first week. Against the Jaguars, they were consistently pressured and making mistakes.

And the Jets were able to really limit their turnovers this game. Yes, Powell’s fumble did result in the Broncos scoring on the ensuing drive, but the Jets were able to overcome that and then show up, putting in a magnificent performance. Darnold’s lone interception showed his inexperience as he is still adjusting to the speed and play in the NFL. Otherwise, the offense put on a solid display of being able to maintain control of the football and limiting mistakes.

The defense was finally able to breakthrough in the game by getting to the quarterback. Williams had two and a half sacks, breaking out of a slump and showed his worth as the number one starting defensive lineman. The Broncos offensive line had two week spots which were both offensive tackles and the Jets linebackers were able to exploit that. They combined for a total of two sacks as well. Utilizing a 3-4 defense, the outside linebackers must get to the quarterback and either pressure or sack him, and that is what the Jets were able to do best against Case Keenum. In the last game, they did have two sacks against the Jaguars but the defense wasn’t able to keep a consistent amount of pressure on Blake Bortles who had a career game against the Jets.

Perhaps it was the big/long plays that came as a result of the attitude adjustment. Crowell had multiple long runs of over 30 yards and of course the 77 yard touchdown run. Darnold was able to throw some deep passes and show off his arm. And even Terrelle Pryor had some action with a 20 yard one hand grab touchdown catch.  Until this week, the Jets had little to no major big plays so going forward they need to stretch the field to gain big yardage on long runs and long passes.

The Indianapolis Colts are currently in a tough situation. With a 1-4 record, they have suffered from some tough losses. In Week one, they lead the whole game only to lose to the Cincinnati Bengals after giving up 17 points in the fourth quarter. In Week 3, they gave the Houston Texans an early Christmas present when in overtime, they didn’t convert on a fourth down opportunity in their own territory. Houston would make an easy field goal to win. Last week they lost to the New England Patriots 38-24. The Colts average 74 rushing yards a game which is 29th in the league and go up against a Jets team that is known to have a solid rush defense. They do however average 283 yards of passing a game which is ranked 14th in the NFL. This season, the Jets defense has been picked apart by the passing game. They will need to once again get pressure on the quarterback to get inside his head. Meanwhile, the Colts offensive line has had their fair share of problems, giving up 10 sacks.

The Jets should be able to push back the offensive line to pressure Andrew Luck who has thrown five interceptions so far this season. On the other side of the ball, the Jets offense will go up against a defense ranked 24th in the league. Despite being 24th, Indianapolis has racked up 17 sacks this season so this will be another test for the Jets offensive line. At the same time, the Colts give up an average of 107 rushing yards a game which could result in another big game where Jets running backs can compile some big numbers. This is the ideal time for the Jets to even up their record to 3-3 with a win. They will be at home, facing a head coach in his first year and are coming off a game that should give them momentum. Maybe if Crowell or Powell breaks one early for a big gain, they will stampede past the Indianapolis Colts.  One thing is for certain, the Jets better not take the Colts too lightly.