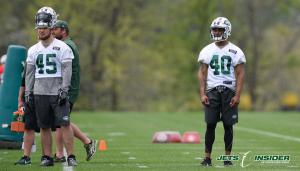 FLORHAM PARK, NJ – After years of draft picks not living up to their potential the Jets may be looking at their deepest draft class in 10 years. All six of the picks taken in the 2018 draft have made their presence felt early in training camp, with some of them seriously competing for starting positions.

The obvious, Sam Darnold, has shown the ability to understand mistakes and correct them. Oftentimes overthrows and missed plays have been followed up with long completions. These signs of progress and an understanding of evaluating plays is what makes Darnold special. The arm strength and physical capabilities are just something that comes with the full package. The 21-year-old completed multiple touchdowns in todays practice, something he is doing on a daily basis around here.

Nathan Shepherd has been the most surprising to people. The Division II Fort Hays product has grasped the defense so quickly that he has been subjected to working mainly with the first-team. The jump from Division II to the pros concerned most scouts, which is why he was taken in the third-round. Now, he is fighting for a role on the defensive line, and looking awfully good while he does it. If he can sustain this early success, the Jets may have just found a steal for their already up-and-coming defense.

The tight end position has been open since Austin Seferian-Jenkins left this offseason. In comes Chris Herndon from Miami. The 6’4″ big man has gotten a mix of first and second-team reps during his first weeks of camp. His ability to stretch the field, maintain catches and work in traffic has made him stick out early on, and might end up winning him the starting role. In addition, the connection between him and Darnold is clearly there. The two have seemed to be on the same page since the day Darnold stepped foot in the building.

One of the most anticipated parts of the Jets roster is the secondary. Parry Nickerson, a sixth-round pick out of Tulane, was seen as an afterthought with the Jets signing Trumaine Johnson and Morris Claiborne to deals. Instead he has gotten work the first team on occasions and been active in batting passes down in coverage. One of the more underrated aspects to a team can be the reserve players, and Nickerson would suit just fine filling in one of those spots.

Folorunso Fatukasi started to emerge more in practice today as another underwritten piece of the defensive line. He made multiple terrific stops, especially in run coverage. Todd Bowles raved about his athletic ability following practice, and told reporters he plans on seeing more of what he can do. Whether it’s Fatukasi or Shepherd, the Jets will need all the help to take the load of Leonard Williams.

Last but certainly not least has been Trenton Cannon. The Virginia State running back has shined in different aspects throughout camp. As a runner he has been decisive and quick on reading the open holes and creating big plays. When used as a wideout from the backfield he has looked comfortable, and there have been little to no drops in any of his practices. And as a punt returner he shows explosiveness, something the Jets have not seen since Leon Washington.

Although it is very early on, and the Jets have yet to play a preseason game, the early markings of quality picks ready to make contributions are written on the wall.

Source Mangold Extension Could Come Today,Where Has The Offense Gone,The Morning After Report,Rex Readies For Round Iii,The Argument For Keeping Four Rbs,Jets Healthy After Bye Week Break,Jets Continue To Embarrass Themselves,Why The Addition Of A Proven Blocking Tight End Should Be A Priority For Joe Douglas,Jets Falcons Live Blog Direct From The Meadowlands,Victory Monday