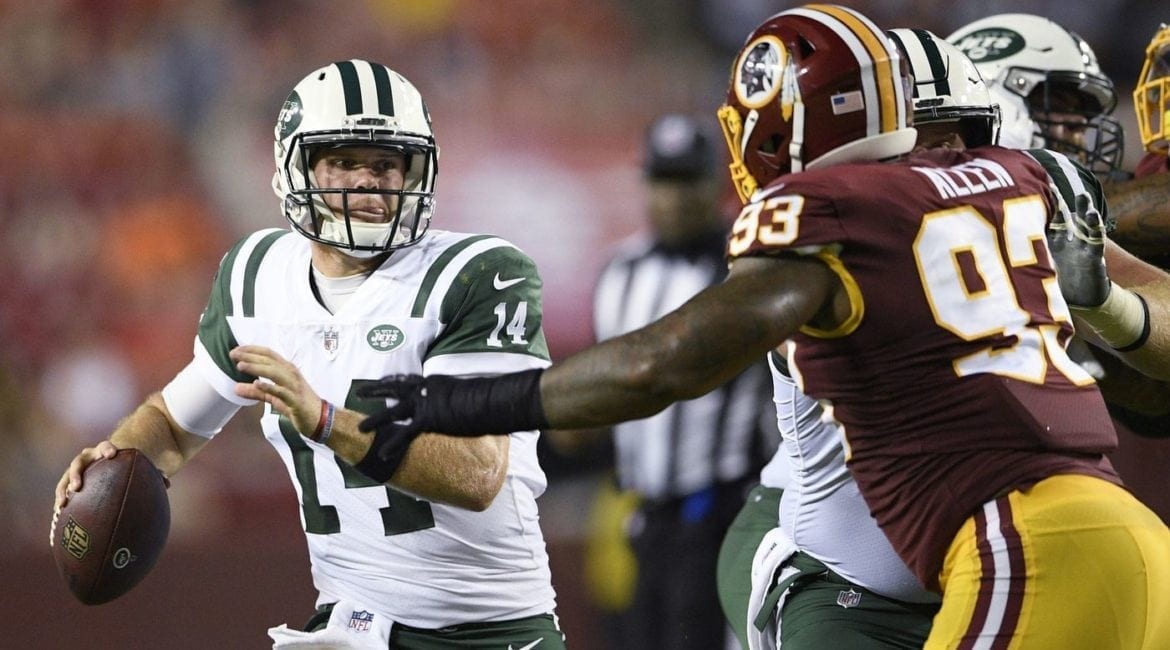 Landover, MD— Everyone was in preseason form today, including the Washington marching band, who struggled mightily to maintain the “Hail” they attempted to form, with band members almost running into each other before the game. That carried into the game. Only the miscues came mostly from the Jets, in particular the offensive line.

It is currently unknown how long Kelvin Beachum is going to be out, but a broken foot could cause some complications. In his absence the Jets would normally play Ben Ijalana, but he was put on IR with a shoulder injury. Brent Qvale is who they have at left tackle, and he struggled against the revamped defensive line for Washington. Qvale got a drive-stalling false start, and on the next play he ran into another blocker on a run play that netted zero yards. The next play wasn’t better for the offensive line, as James Carpenter allowed a sack to first-round pick Da’Ron Payne. Not a great series for the front five.

Sam Darnold had his moments, but was largely pedestrian. When he stepped onto the field, everyone fell silent, preparing to watch the 21-year-old quarterbacks. All eyes were on him, which is a tough place to be. They give him an easy pass to start off with, a two-yard dump off to Eric Tomlinson.

The next two plays he faced immense pressure and threw it away and took a sack, courtesy of Payne again. That would be the theme of Darnold’s time under center.

On his second drive, Darnold settled in. On third down, not wanting to have multiple three-and-outs to start the game, Darnold hit Tre McBride in a tight window to get the first down. The next play he threw a beautiful pass to Jermaine Kearse, just short of the first down. On second down they decided to run it, but it was stuffed. Again with his back against the wall, Darnold converted on a throw to Tre McBride with a hand in his face. Although the drive was eventually stifled by the aforementioned offensive lineman miscues, the future is bright at quarterback for the first time in a long time for the Jets.

However, Darnold did not have a perfect night. On his interception, he threw into double coverage on fourth down. He was pressured, and it was tipped up by Deshazor Everett and then caught by Troy Apke. Chalk it up to rookie jitters.

Teddy Bridgewater had a strong night going against Washington’s second and third-string units, completing 10-of-15 for 127 yards,one touchdown and one interception in just over one half of play.

On the touchdown Bridgewater shook off a defender and found Charone Peake at the highest point where only he could catch it. Antonio Garcia allowed the pressure, and on the previous play he missed a block on a linebacker who proceeded to make an easy tackle. The second-team offensive line did not fare much better than their first-team counterparts.

Bridgewater did have one bad play, the interception, an underthrow towards Charles Johnson that Prince Charles-Iworah made the easy play on. After the game Bridgewater explained that after a two-year hiatus from football, he was just happy to be there.

“We did a good job of dealing with adversity, I threw an interception and we came back and had a scoring drive. It was just a lot of fun,” Bridgewater said. “Sorry I keep repeating how fun it was, after two years of not really knowing what was going on, it’s just really great to lace up my cleats, strap up my knee brace and get out there and take some hits.”

Todd Bowles was happy with how Bridgewater played but he wished he could have avoided getting hit so much, saying “I told him if he wants to get hit, I have certain neighborhoods I could take him.”

When asked if he feared for his quarterback, Bowles said “No, I didn’t even really think about it, I know Teddy is tough, he can handle himself.” Bowles clearly has a lot of confidence in the work Bridgewater has put in to come back to the NFL.

On the defensive side of the ball, the rookies showed up to play. Frankie Luvu got a clean look at Colt McCoy on his first play, and demolished him. Like a rookie however, he lead with his helmet and got a penalty. He did it again later, but when Bowles allowed him back on the field he made a big tackle for a loss.

Nathan Shepherd had a strong night, and made his presence felt in the run game. Shepherd recorded two tackles with the first-team, and got a quarterback hit.

Once again Bowles made the odd decision to play some starters on special teams, Jamal Adams and Darron Lee got multiple looks on kickoff, which might have brought memories of Giants cornerback Jason Sehorn’s horrific broken leg that he suffered on special teams. Thankfully nothing along those lines happened.

The Jets were the beneficiary of the new rule changes where the referee’s are going to blow the whistle earlier when they think players can no longer advance the ball. Robby Anderson made a catch and just about broke the defenders tackle, but his forward momentum was stopped. He kept his legs however, and the next defender came up and knocked the ball out of his hands, but the whistle had blown. Lucky for Anderson, as this was his only reception on the day.

25 Jets did not suit up tonight, including Trenton Cannon, Chris Herndon, and Brian Winters, but many of the injuries are minor and they will be available to play the next preseason game against the Giants at home on August 24th.