Which free agent cornerbacks are actually any good? 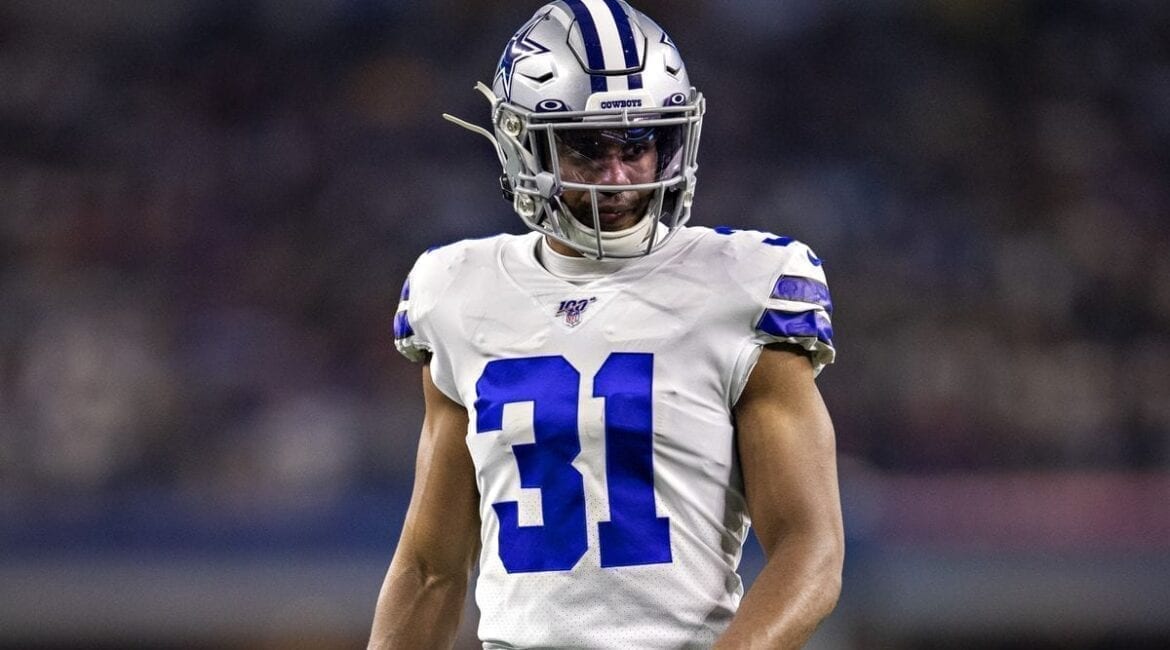 Cornerback is one of the toughest positions to analyze in football. It is a role where players only get a few opportunities to produce anything positive, but are rather tasked with holding up for as long as possible without doing anything negative. Similar to the offensive line, it is a preventative position. The less you allow your opponent to do, the better you are doing.

The problem with this is that there are not a ton of great statistics available for the general public to understand how good players are at these things. This leads to fans looking towards stats such as total tackles and interceptions, which are awful tools to gauge a player’s true impact.

Luckily, with Pro Football Focus, we can get a better (although still imperfect) estimate of which cornerbacks are actually making a positive impact through their ability to limit production.

The Jets will certainly have their eyes on the free agent cornerback market once the floodgates open in just a few weeks. Which players make up the cream of the crop?

From a statistical standpoint, hardly anybody could claim to have been better than Poole was in 2019. That is especially true in the slot, where he has the strongest argument as the best inside defender of the season.

Was their success a fluke? – For each player listed here, I want to address the likelihood that their 2019 success can be replicated. It is important to evaluate a much larger body of work than simply the most recent season to determine whether the player will be a safe investment. That is true of any position, but especially so for cornerback, one of the game’s most volatile positions.

Poole had a good rookie season in Atlanta, grading out at 22nd among cornerbacks, but he dropped to 74th and 84th over his next two seasons. It seems Poole is due for a dip from 2019, but he has shown top-tier level play before. In 2016, he allowed the fifth-fewest yards per slot cover snap. There is reason to believe he can remain an elite-level slot corner. For the Jets, it is worth giving him the shot. Poole may not be a surefire bet to succeed in 2020, but he is undoubtedly a better bet than anybody they could find to replace him.

Dennard only played nine games in 2019 after starting the season on the PUP list, but he was elite when out there. A slot specialist, Dennard finished just inches behind Brian Poole for the top spot in fewest yards allowed per slot cover snap.

We get to our first outside corner on the list. Jones had an outstanding season in Dallas, trailing only Richard Sherman in fewest yards allowed per cover snap among outside corners (0.62). He played a big part in the Cowboys’ defense allowing the sixth-fewest receiving yards per game to wide receivers (134.9)

Was their success a fluke? – 2019 was not Jones’ first elite season. In 2018, Jones was graded the seventh-best overall cornerback and ninth-best in coverage. He also allowed the 12th-fewest yards per cover snap and ranked eighth in cover snaps per allowed reception (16.5). As a rookie, Jones ranked 43rd overall and 27th in coverage. He moved to safety in 2016-17, so in all three seasons at cornerback, Jones has played at a high level. His consistency makes him arguably the best cornerback option on the market.

Williams was fantastic manning the slot for the Packers in his 13th NFL season. He ranked seventh at the position with 357 snaps in slot coverage and appeared in every game for the second consecutive year.

Was their success a fluke? – Williams is about to turn 37, so any team thinking about giving him a key role in 2020 would have to be extremely cautious no matter how dominant he was the previous season. With that said, each of Williams’ last two seasons at cornerback have been tremendous. He played safety for Green Bay in 2018, but when playing corner for Arizona in 2017, Williams ranked 11th in coverage grade and allowed the ninth-lowest passer rating (58.4) at the position. He could be a great one-year investment.

Amukamara had another good season in 2019, ranking 14th in cover snaps per allowed reception (14.5) and recording 10 passes defended on just 58 targets.

Was their success a fluke? – While you must always proceed with caution when dealing with a cornerback in his 30s, Amukamara has strung together a track record of consistency. Among cornerbacks with 200-plus snaps in a given season (usually around 130 players), Amukamara has ranked in the top half of overall grade in all eight seasons he has qualified.

We come upon yet another veteran. Brock began his 10th NFL season with the Cardinals, and finished it with the Titans. Over Tennessee’s three-game playoff run, Brock allowed just 93 yards on 24 targets, a measly 3.9 yards per target.

Was their success a fluke? – Brock fits the profile of a veteran who may have simply lucked out for a year and is headed for a downturn into his 30s. Injuries are the first question mark, as Brock has played in just 117 out of 160 possible career regular season games (14 in 2019, 12 in 2018). It had been a while since Brock played close to the level he did in 2019. He struggled for the Broncos in 2018 (104th in overall grade) and in 2017, the Vikings used him mainly in a special teams role. 2019 marked his best-graded season both overall and in coverage since 2013. Be wary.

Hilton handled a nickel role for the Steelers, playing anywhere from 22% to 95% of defensive snaps in a given game and ranking 15th at his position with 296 snaps in slot coverage. He was valuable as a pass-rusher, ranking 10th among cornerbacks with 10 pressures, and also recorded 11 passes defended on 58 targets.

Was their success a fluke? – Sure doesn’t seem like it. Hilton was graded the 10th-best overall corner in his 2017 debut season (he was signed as an undrafted free agent in 2016) and placed 41st in 2018. At just 26 years old, Hilton is arguably the second-best slot option after Poole.

Smith only played nine games in the 2019 regular season, but he was stellar when out there. He allowed the tenth-lowest passer rating (65.4), while yielding just 5.4 yards per target. Teams did target Smith often, as his average of 5.5 cover snaps per target made him the 13th-most frequently targeted cornerback.

Was his success a fluke? – Smith has been highly erratic throughout his career. Staying on the field has been an issue, as he has played only 107 out of 144 possible regular season games. He has not played more than 12 games since the last time he recorded perfect attendance back in 2015. Smith had elite seasons in 2014 and 2017, ranking 12th and 11th, respectively, in overall grade. In between there, he was generally just fine, ranking 74th, 55th, and 65th in overall grade in 2015, 2016, and 2018. Getting decent play out of Smith seems like a good bet, but getting him on the field for more than three quarters of the season does not, especially as he approaches 32 years old.

Roby had a decent season in coverage for Houston, ranking in the top half of yards allowed per cover snap and the top quarter of coverage grade. His one-to-two touchdown/interception ratio allowed powered him to a 77.4 passer rating allowed that ranked 24th-best. Missed tackles were a problem, though, as Roby was the least-efficient tackling cornerback among players with 500-plus snaps (12 missed, 34 made). He missed four more in the playoffs. Roby also missed six games, an outlier after missing just one over his first five seasons.

Was their success a fluke? – Roby was mostly solid in coverage throughout his five seasons in Denver, although his career has been quite a roller-coaster ride in terms of productivity. From 2014-18, he ranked 39th, 17th, 73rd, 26th, and 92nd in coverage grade, a respectable average of 49.4 that would generally place him in the top-40%. His career averages of 7.3 yards per target and a 91.6 passer rating allowed are solid. He has always been a bad tackler, though, missing an average of 10.5 per season. Roby is not consistent or complete enough to be worth a huge investment, but he has a better track record in coverage than most cornerbacks do, and that could net him a healthy deal from a team hungry for help in that area.

Harris posted the worst coverage and overall grades of his career in 2019, but he was still a comfortably above-average cornerback by most metrics in his age-30 season. On the downside, Harris yielded a 109.4 passer rating on targets in his direction, the first time he allowed a mark higher than even just 90.0 since his rookie season. Part of his decline may have had to do with a move outside. Harris covered the slot on just 30 snaps in 2019, the first time in his career that he covered inside less than 200 times.

Was their success a fluke? – 2019 was hardly a success for Harris by his standards, but he was still a reliable player. If a team wants to get the most out of him, they have to move him back inside, where he established himself as perhaps the best slot cover man in football. Harris ranked top-15 in fewest yards per slot cover snap every year from 2012-18, including four seasons in the top-five. Just recently in 2018, Harris earned the fourth-best overall grade among all cornerbacks and led the league in slot cover snaps per allowed reception (12.7). Also possessing a strong track record of durability (139 of 144 career regular season games played, 16 in 2019), Harris seems like a solid bet to provide a team with plenty of bang for their buck if they play him where he is most comfortable.