JetsInsider.com > News > Blogs > Jets Can’t Keep Up With Texans In A Hoedown At Metlife; Fall 29-22

Jets Can’t Keep Up With Texans In A Hoedown At Metlife; Fall 29-22 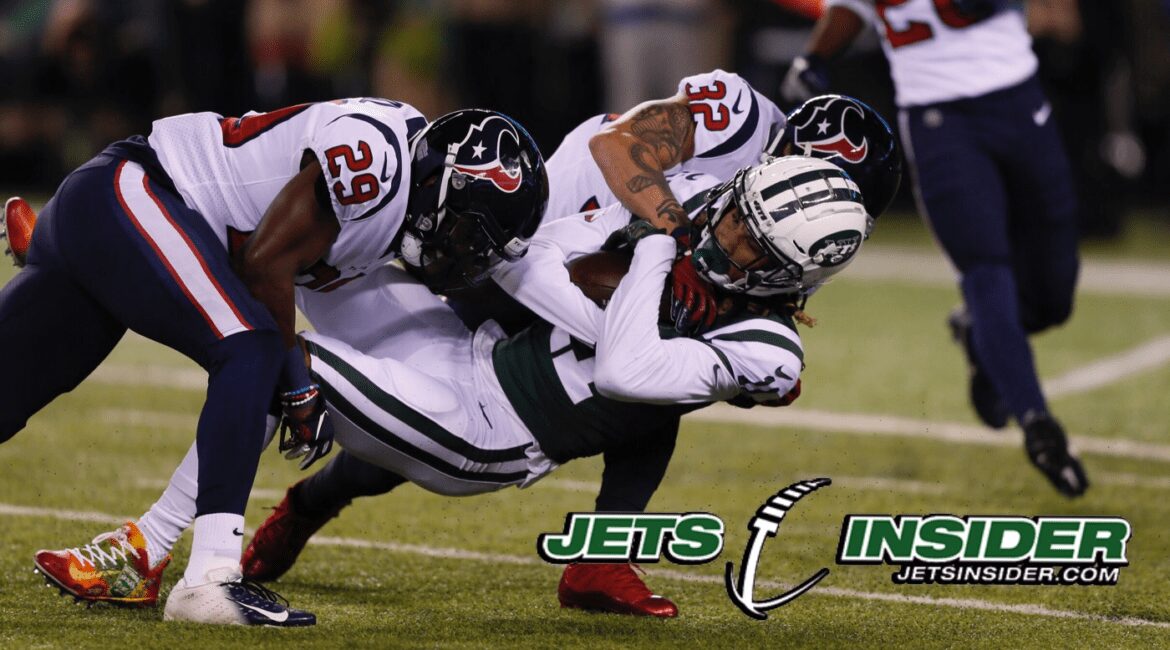 East Rutherford, NJ – Jets fans… We have good news and bad news. The bad news is the Jets lost to the Houston Texans. The good news is despite the loss, the team played fairly well, Sam Darnold looked like an all-star and the Jets are closer to a better first-round pick. The Texans had so much more at stake tonight. With a win, they have the chance to clinch a playoff berth and the AFC South with the help of other teams losing or tying tomorrow. They are searching for their first playoff berth since 2016. The Jets were eliminated but the one thing, or more specifically the one person, they should play for is their rookie quarterback. With this game and the remaining schedule, the team can expect Darnold to develop and show maturity before his second year in the NFL. Darnold didn’t let fans down tonight. Here’s the skinny of how the game went down Saturday.

The Jets got off to a slow start, going three-and-out on their first drive which ended with a 10 yard sack from J.J. Watt. After punting the ball away, Deshaun Watson led the Texans down field but Gang Green was finally able to catch a major break from the zebras. On third-and-seven, at the Jets nine-yard-line, defensive end Henry Anderson attempted to sack Watson and Watson was able to shake him off, but the refs blew the play dead, saying Watson was in the grasp. This limited Houston to three points off a 41-yard field goal from Ka’imi Fairbairn, his 30th field goal made in 2018.

With help from three penalties on the Texans, the Jets responded with a long drive of their own. The Jets drive would stall on Houston’s eight-yard-line as they could not find the end zone. They had to rely on Jason Myers to knot the score up at three. Myers converted a 26-yard field goal for the Jets.

On the ensuing drive, DeAndre Hopkins ran circles around the Jets defenders with three catches for 45 yards but the Jets were able to hold the Texans at the 15-yard-line. Fairbairn would convert a 32-yard field goal putting Houston up 6-3.

With about eight minutes left in the second quarter, Elijah McGuire would fumble and give the Texans great starting field position at the Jets 46-yard-line. On their second play, Watson launched a 45-yard pass to the end zone which was caught by Hopkins. Darryl Roberts looked like he gave up on the play possibly losing sight of the ball as Hopkins was wide open. When Fairbairn converted the PAT, Houston extended their lead to 13-3.

On Houston’s fourth drive of the night, Demariyus Thomas was able to juke out Trumaine Johnson on the first play gaining 27 yards and putting the Texans into Jets territory. The Texans would not get a first down on their next set of downs and Fairbairn would be called on to boot a 52-yard field goal, putting Houston up by 16-3.

Instead of letting Houston go into halftime with a 13 point lead, Darnold had other plans for the Jets. Darnold led the offense 83 yards down field, starting off with a 10-yard scramble and then completing five out of five passes for 66 yards. The finishing touch came at the goal line when Darnold bought time scrambling around the pocket. He looked as if he was ready to take off but stopped when a linebacker cut his path off. Instead he stopped, jumped and threw a pass to Robby Anderson in the end zone for the Jets first touchdown of the night. Myers missed the PAT and the Jets were down 16-9 heading into halftime.

Gang Green came out with guns ablaze in the second half. They forced a three and out with help from sacks from Jordan Jenkins and Henry Anderson. The Jets got possession of the ball on their own 40 and instantly, Darnold found Robby Anderson for a 20-yard catch along the sideline. McGuire and Trenton Cannon powered through the Houston defense and the drive ended with a 13 yard touchdown strike from Darnold to Andre Roberts. Myers, once again missed the PAT and the Jets trailed by one.

It was back and forth between both teams as the defenses held their own. The Texans offense was pinned down on their 12-yard-line when Watson found a wide open DeAndre Carter for a 50-yard gain putting Houston into Jets territory. Because the run was failing them, the Texans used the passing game to inch closer and closer to the end zone. Jamal Adams would put an end to their end zone attempt with a 14-yard sack, forcing Houston to kick a field goal. Fairbairn’s kick was good and the Texans led 19-15.

For the Jets ninth drive of the game, Darnold and company drove down the field and with some help from some clutch catches and defensive penalties, the offense reached the red zone. With help from a defensive holding penalty, Darnold scrambled his way to the two-yard-line. McGuire would score the go ahead touchdown running right into the defensive front. In the middle of a scrum, McGuire and the huge pile was pushed into the end zone. Myers finally made the PAT and the Jets had their first lead of the game.

But the Texans did not give up and quickly came down the field. On third-and-four, it appeared the Jets had stopped the Texans on the Jets 43-yard-line when the balled sailed out of bounds but Claiborne was called for a holding penalty on Hopkins. Houston’s drive ended in a touchdown to Hopkins who caught a floater in the left side of the end zone, making the catch over non-other than Morris Claiborne. Fairbairn’s extra point attempt was good and the Texans led 26-22.

Gang Green had two minutes and 15 seconds to work with for their final drive of the game. They couldn’t get much going and turned the ball over on fourth down when Darnold found Anderson down field, only to have the ball tip off his hands. Fairbairn added his sixth field goal of the night and this cemented the Texans 10th win of the season by a score of 29-22.

Sam Darnold finished the game completing 24 of 38 passes for 253 yards and two touchdowns. He also had six carries for 35 yards. That’s a stat line you want to see from your rookie quarterback. Once again the offense line had its ups and downs by letting the Texans get to Darnold and taking dumb penalties. Darnold was scrambling all over the field because of the lack of pocket protection.

Nonetheless, Darnold had nothing but good things to say about his offensive line and the offense as a whole.

“I thought our offensive line played really well. We handled J.J. and Jadeveon (Clowney) really well. Our receivers got open and we’ve got to finish the game.”

After the game, Coach Todd Bowles was more disappointed about the game than most Jets fans.

Next Sunday, the Jets will welcome in Aaron Rodgers and the Green Bay Packers for their last home game of 2018.