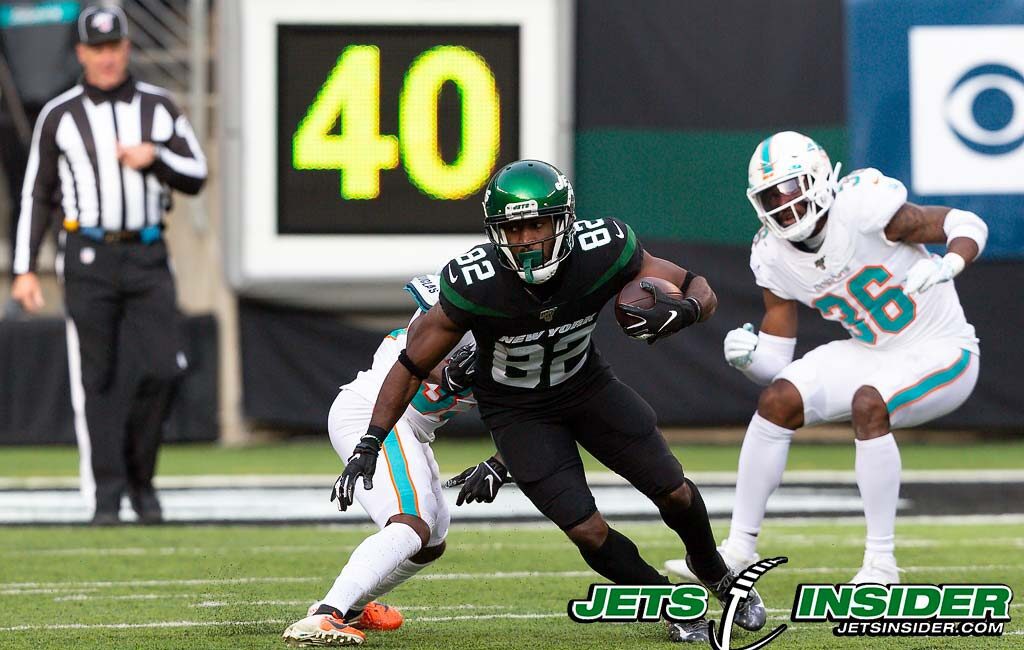 Another Jets practice, another day of Carl Lawson and Elijah Moore demanding our attention and adulation. Every single day they show up and show out. Then the next day I think, ‘we get it, Moore and Lawson are dominating, but what about the rest of the team? That’s fair and correct, but dammit these guys keep making it impossible to not talk about them. So today I figured, I’ll just write about those two in the intro. Get it out of the way then we can transition to the rest of the team.

Before I do that, I’ll tell you about another solid day from Zach Wilson. Wilson hasn’t looked anywhere as good as he did on that Saturday practice where he lit the field on fire. But he also hasn’t had any days that were anywhere near as bad as his first practice. Every other day has been somewhere in the middle, but all were in the solid-to-good range.

Wilson makes mistakes, as expected, but you can actually see him learning from those mistakes in real time. He’ll go right back to correct the mistake as soon as possible and I’ve yet to see him fail twice in a row. He has a live arm, can make all the throws and has excellent placement. His pocket presence has been really impressive, far from perfect but still impressive. He’ll be late on a read and/or throw from time to time, but not consistently. On the whole it doesn’t feel like things are moving to fast for him at all, but occasionally you can see him late to process. That is to be expected of course and I’d certainly say he’s ahead of where I expected him to be at this point. But enough about Wilson for today, I’ll continue to talk about him everyday. Let’s get to some other players.

1) Great Run Blocking, Not So Great Pass Protection – It’s been a common theme throughout every single day of practice. This offensive line can be a force in the run game, but they are flawed in pass protection. Part of that is simply due to the fact that Lawson is a terrible matchup for Mekhi Becton, but it’s also more than that. Morgan Moses and Greg Van Roten are constantly getting beat on the other side as well. John Franklin-Myers and Bryce Huff have caused the most problems on that side, but this is all happening without Quinnen Williams. Vinny Curry hasn’t played yet either and if the offensive line is struggling this much now imagine the problems they’ll have when Williams can penetrate the pocket from the inside.

It’s great that this offensive line can open up huge holes in the run game, but their rookie quarterback needs a cleaner pocket to work with. The running backs certainly won’t be complaining about this line though. Whether it’s Michael Carter, Ty Johnson or Tevin Coleman, whichever back gets the rep finds open lanes to dart through. All three backs have been impressive, showing good speed, shiftiness and explosiveness. With a rookie quarterback destined to open the season as the starter the Jets were always going to lean on the running game. With the makeup of this offensive line, offensive coordinator Mike LaFleur may be tempted to lean on it even more.

2) Brandin Echols Earned Himself First-Team Reps – The surprise of the day was Bryce Hall running with the second-team defense. Hall has been the most impressive corner throughout camp, but Echols running with the ones has been well earned. After practice Robert Saleh confirmed, this was all about Echols earning those reps.

“Echols is playing (well),” Saleh said. “He’s got good foot speed, he plays big. He plays strong. And he’s been able to absorb all the things that have been coming at him. So, he’s been doing a great job versus the twos and threes so we wanted to give him some run versus the ones to see how he measures up and I thought he held his own out there. Again we’ll get a chance to see in detail on the tape. But you’re going to see more of those rookies get thrown in there to give them a shot to go compete.”

3) Receivers Not Named Elijah Moore – You know how well Moore is doing. You can’t escape that. But the rest of the receivers are looking pretty damn good as well. Corey Davis has been consistently good. Keelan Cole is averaging at least one wow catch a day and Jamison Crowder’s screen game is still as dangerous as ever. Every time Crowder catches a screen he weaves his way through a sea of defenders for a big gain. Even Denzel Mims and Lawerence Cager made an impression today. Then there’s the Smiths (Vyncint and Jeff) who have the speed to burn past just about anyone. This receiver group is deep and their skills compliment each other very well. Which is a huge thing for a rookie quarterback to be able to lean on.

INJURIES AND OTHER NOTES:

First and most important, Cameron Clark is expected to make a full recovery. Clark suffered a spinal-cord contusion, which is basically a “stinger.” There’s no timetable for his return to the team yet. Alijah Vera-Tucker is listed as day-to-day with a strained pectoral muscle. Jabari Zuniga is out with an ankle. Chuma Edoga is out with a knee. Vera-Tucker and Zuniga aren’t expected to miss much time, Edoga will likely miss the most time.

The Jets have a new quarterback. Not one that will hamper Wilson’s progress, but one with experience that can actually serve as a backup. Josh Johnson The 35-year-old journeyman has experience in this offensive system and can competently run an offense. If something happens to Wilson, Johnson isn’t likely to lead the Jets to numerous victories, but at least the rest of the roster can still be evaluated properly.

“I had some of the highest regard for him before he even got here. I think he’s one of those rare guys that, he’s an exceptional player but the general public doesn’t know him yet. The general public is obviously very caught up in sacks and quarterback disruption and the statistical part of rushing, which he doesn’t always check those boxes. But he’s been a guy that has historic win-rates. His obsession with this game, now to see him up close as far as his stance and the timing of his hands, and his feet, and the distance from the tackles foot and the way he studies the tackles set and the way he studies the offense. It’s as obsessed as I’ve ever seen. So from that standpoint I’m blown away. (He’s) a student of the game.”