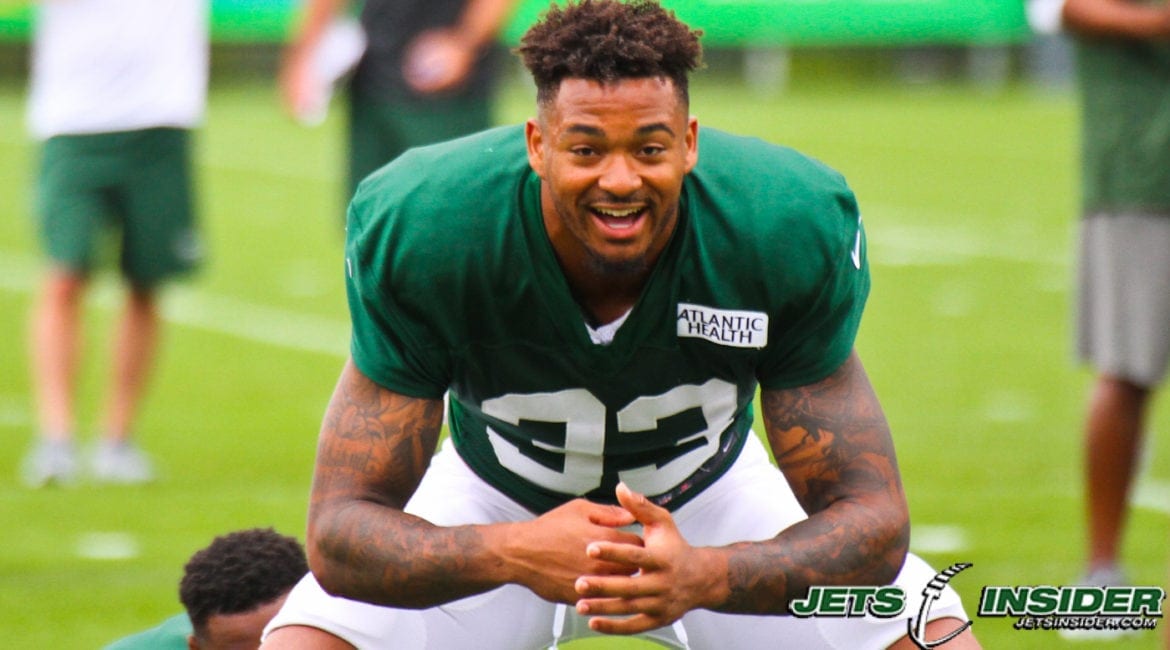 FLORHAM PARK, NJ – The Jets are light on name-power at the top of the roster, but Mike Maccagnan is going to face some tough decisions when cut-time comes. The Jets still have some fairly big holes in the roster (notably at offensive line and pass-rusher), but when you look at the depth of positions such as; receiver, tight end, defensive line and in the secondary it’s hard not to think this roster is in much better shape than the average football fan expects and all of this was on display today.

Clive Walford was released from Oakland after the signing of Jared Cook, who made Walford a bit of an afterthought. He started his career with two consecutive 300 yard, three touchdown seasons, and finished 2017 with 90 yards and one touchdown. His $1.9 million dollar cap hit was too much on top of Cook’s $5.7 million dollar cap hit, so he became expendable and they cut him.

The Jets, lacking tight end experience, picked him up off waivers on April 2. Eric Tomlinson currently sits atop the depth chart, but that is because of his superior blocking ability. The Jets drafted Chris Herndon, another Miami tight end, and also have Neal Sterling and Jordan Leggett. With Leggett sidelined, there have been plenty of reps to go around between the four tight ends, and Walford has made the best of them.

He has utilized his 258-pound frame to the fullest, bullying linebackers in the middle of the field and using his body as a shield effectively, making multiple big catches in tight coverage. He’s also displayed his athleticism, getting to the outside and getting his 6’4” body vertical while making the defensive backs look like children while coming down with the ball seemingly uncontested.

Given no GM is making any decisions prior to a preseason play being called, it will make for an interesting decision for Maccagnan in a couple weeks. McBride has made two incredibly athletic grabs, and has showed off his 4.3 speed to get open all camp. He sacrificed his body on a Darnold overthrow, and ran right into the uprights in an attempt to make a catch. If McBride can prove his worth in the slot this preseason, he might be able to sneak onto the roster.

During the Rex Ryan years, the Jets were known for having a consistently stout defense, especially against the run. In recent years, the defensive line has not shown enough effort and their run defense suffered. Muhammed Wilkerson is gone, and Leonard Williams worked on his conditioning this offseason. Steve McLendon will continue being an obstacle for opposing running backs. Third-round pick Nathan Shepherd from DII Fort Hayes State has been such a force he played his way into the starting lineup before the first preseason game. Mike Pennel and Henry Anderson are savvy vets and valuable back-ups. The defensive line will not be a problem this year.

The Jets lost Demario Davis, but replaced him with Titans tackling machine Avery Williamson, which is viewed by many as getting a very similar player three years younger, who may be faster and better in coverage. Coach Bowles and Darron Lee himself have both talked about how hard he has worked in the offseason on his conditioning and strength, and it’s showed in the early parts of training camp. The backup linebackers leave a little to be desired, but assuming both Williamson and Lee can remain healthy, the linebacking corps will not be a problem this year.

Now we’re coming to the strength of the Jets roster. The secondary has adopted the moniker New Jack City, and hopefully they can jack a couple more balls of quarterbacks recording 11 picks last year, good for a four-way tie for 20th in the NFL. The Jets signed standout corner Trumaine Johnson from the Rams to a massive contract, and have Morris Claiborne to form a formidable tandem. In the slot they have the scrappy veteran Buster Skrine and underrated sixth-round pick Parry Nickerson. Jamal Adams and Marcus Maye each are going into their second season, and appear comfortable and ready. Backing them up is three-year starter J.J. Wilcox, and training camp darling Doug Middleton. New Jack City and the rest of the Jets defense are ready to surprise this fall.

Kelvin Beachum is week-to-week with a foot injury. Ben Ijalana has been the backup left tackle since arriving in New York in 2013. Brent Qvale is the backup right tackle and goalline tight end. Ijalana has never been too impressive when forced into action, and the once highly touted prospect has never lived up to his early second-round draft spot. Qvale, 6’7”, has three inches on Ijalana, and is a little more athletic. With former third-round pick Antonio Garcia being picked up from the Patriots, Ijalana is not guaranteed a roster spot. If the Jets cut Ijalana, they will save $2.5 million dollars in cap space. Not that cap space is an issue, and at this rate the Jets will have over $100 million dollars in cap space next summer.

Once again, Spencer Long was involved in a botched snap. J.J. Wilcox had a big day, intercepting two passes. Robby Anderson and Terrelle Pryor each made one handed grabs in the end zone, with Anderson being blanketed by Trumaine Johnson.