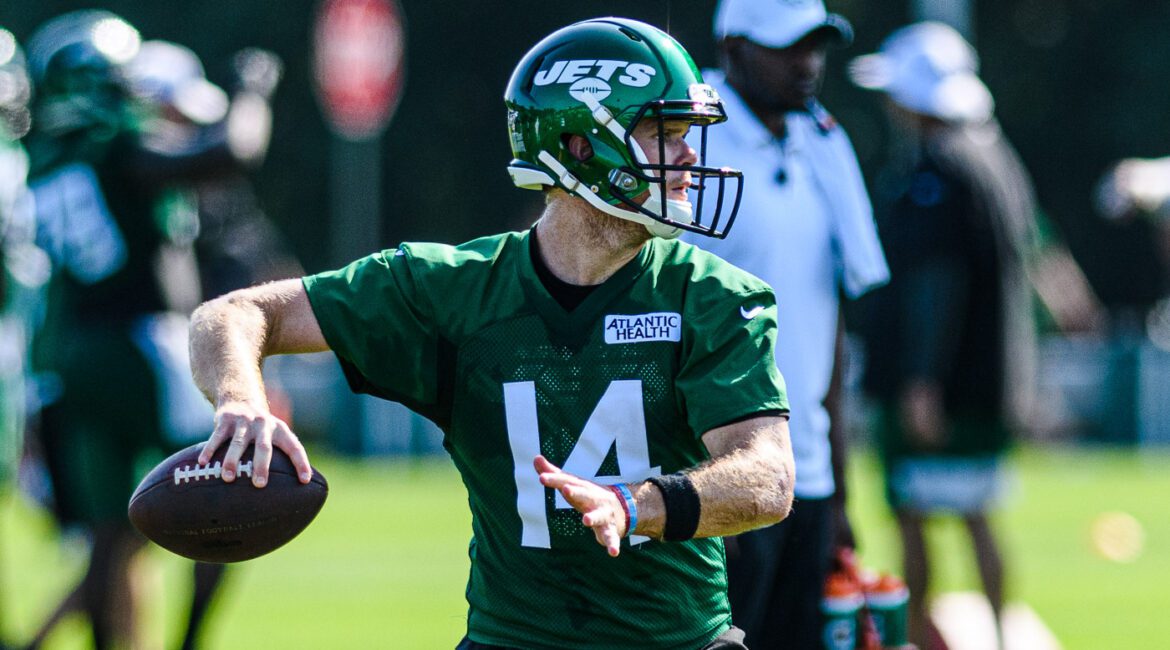 Florham Park, NJ – After an off-day yesterday, the Jets were back out on the practice field and they were with Jamison Crowder. Crowder tweaked his foot during Monday’s practice, Jets Twitter immediately started freaking out only to find out he wouldn’t even miss a single practice. He was a full participant in today’s practice and continued his impressive training camp performance. His quarterback, however, was even better.

1) Sam Darnold had his best practice of camp so far – Darnold was on fire today. He had a mishap on the first snap as he turned the wrong way to hand the ball off, but after that he did just about everything else perfectly. The one exception was he just barely overthrew Robby Anderson on a deep pass that could’ve been caught if Anderson wasn’t looking directly into the sun as he tried to make the catch.

“He (Darnold) was mad after the first play and then I was like, ‘We’re probably going to have a good day,’ because he makes one mistake and he locks in really good.” Adam Gase said after practice.

Darnold made sure to spread the ball around plenty, hitting both Quincy Enunwa and Jamison Crowder for touchdowns and did his best work while moving out of the pocket. On one play Brian Poole had perfect coverage on Anderson, but Darnold started to roll out of the pocket looking like he might run the ball which made Poole come off Anderson and go after Darnold and as soon as Poole committed, Darnold hit the brakes and made a perfect pass to a now open Anderson.

Darnold wasn’t the only quarterback that had a great day though, Trevor Siemian also had his best practice of camp. Siemian is the heavy favorite to win the backup job and today he showed why. He threw a couple of beautiful touchdown passes today and simply looks more comfortable running the offense than either Luke Falk or Davis Webb.

2) Quinnen Williams took some first-team reps – Quinnen Williams got two back-to-back reps with the first team defense today. On the first rep he did an excellent job of penetrating and disrupting the pocket, but Darnold was able to slip out of the pocket and make a great throw on the run. Williams was stopped by Kelechi Osemele on the second rep. After that Williams stayed in as the second-team units came on the field and Williams power-rushed past guard Jordan Morgan and would’ve had an easy sack. Williams is getting plenty of reps and doing a little more with them each day.

Jachai Polite got a handful of second-team reps today, the most he’s had so far, and looked good out there. Polite showed off his speed and burst off the line, caused some disruption and forced the quarterback out of the pocket early. As with Williams, it seems Polite is getting more and more on his plate each day and while he isn’t dominating you can see little things starting to click for him.

3) Cat-Man conundrum- The Jets might have themselves a problem at kicker. And might is being generous. Chandler Cantanzaro has had a poor camp so far. He had a poor season last year and there was no real reason to expect that to be different this year even before training camp started. After practice Gase said he isn’t worried about Cantanzaro and they aren’t thinking about bringing in another kicker.

If Gase does decide to change his mind, and he should, he should probably make this guy his first call.


Geno Smith Leads Jets To 30 28 Victory In Atlanta,Fighting From Within,Same Old Jets Not Anymore,Jets Bills Preview The Finale About Nothing,Jets Dolphins Air It Out In Jets 31 23 Victory,Damien Woody Likely To Return,The Morning After Report Preseason Finale,Playoff Math So Youre Telling Me Theres A Chance,Running Ahead Of The Pack,Tracking All The Jets Udfa Signings