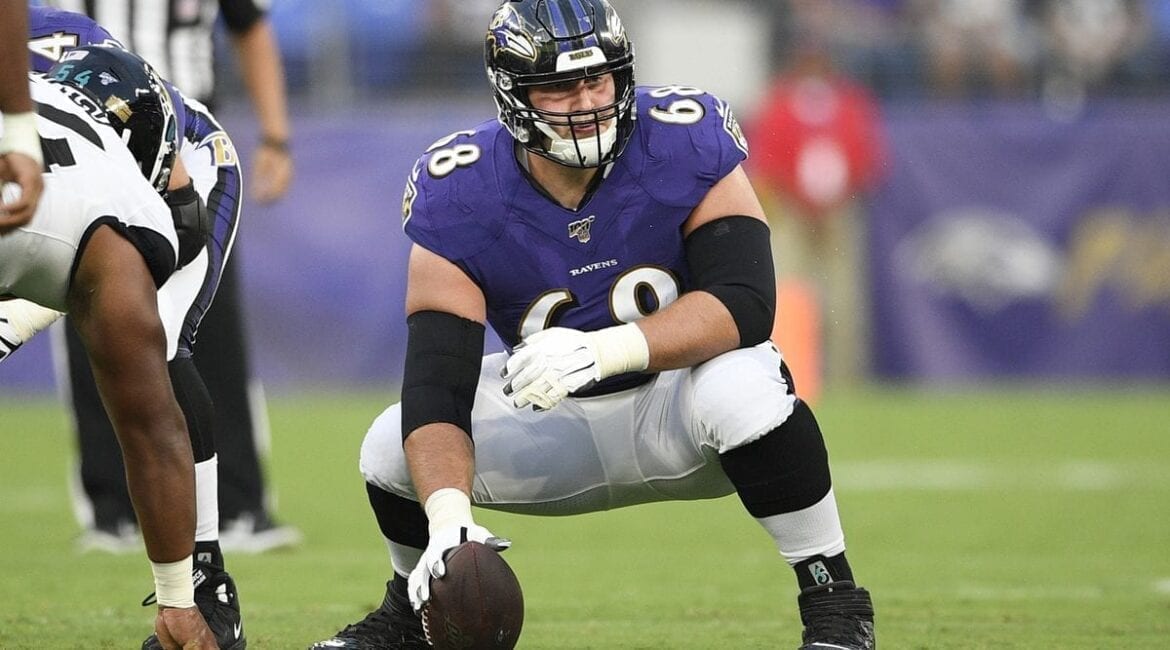 After already breaking down two potential free agent center targets in Connor McGovern and Ted Karras, we move on to a third: Baltimore’s Matt Skura.

Draft: Undrafted in 2016, signed with Ravens

Skura entered the 2016 Draft following his redshirt senior season at Duke. He started at center throughout each of his final three seasons with the Blue Devils, being named third-team All-ACC as a redshirt junior and elevating to first-team All-ACC in his final season. While Skura was knocked for his lack of strength and athleticism, his intelligence, technique, and finesse were seen as pluses heading into the draft.

Skura went undrafted, and wound up signing with the Ravens. He earned a spot on the practice squad and signed a reserve/futures contract after the season.

Three weeks into the 2017 season, Skura was tossed into the fire for his first regular season NFL action, replacing the injured Marshal Yanda as Baltimore’s starting right guard. Skura would miss two games with a knee injury, but he started 12 games at right guard that season. He graded out poorly, ranking 58th out of 63 qualified guards at Pro Football Focus.

Following the departure of Ryan Jensen to Tampa Bay, Skura became Baltimore’s starting center in 2018. He started all 17 regular season and playoff games that season, leading centers with 1,188 snaps played in the regular season. In 2019, he started the Ravens’ first 11 games before going down with a season-ending knee injury in Week 12.

Here is where Skura graded out among qualified centers over the past two seasons:

Skura seemed to be improving significantly in his second season at center before his injury. He allowed a measly seven pressures over 346 snaps in protection, ranking fifth out of 33 qualified centers in pass-blocking efficiency (per-snap pressure rate allowed with greater weight to sacks). That was a substantial improvement over 2018, in which he allowed 27 pressures and ranked 26th in pass-blocking efficiency.

The Ravens had a lot of success running in any direction they wanted in 2019, but they did do a particularly good job running up the middle while Skura was in the lineup. From Weeks 1-12, Baltimore led the league with a 32.4% first down rate on carries directed left guard, middle, or right guard. Among the 33 running backs with at least 50 carries in those directions over that span, Baltimore’s Gus Edwards (5.03) and Mark Ingram (4.96) ranked third and fourth, respectively, in yards per attempt.

Over the final five weeks of the regular season following Skura’s exit, the Ravens fell to 12th in first down rate on rushes in those directions (28.0%).

Over the past two seasons, Skura has averaged 3.56 penalties per 1,000 snaps. For comparison, the average rate among qualified centers in 2019 was 4.71.

Here, Skura executes an effective combo block alongside left guard Bradley Bozeman, plowing Chiefs tackle Derek Nnadi (317 pounds) out of the way to clear a wide-open lane for Mark Ingram to run through.

Watch the timing here by Skura, as he gets off of his initial block and seals the linebacker just in time to open up a hole for Mark Ingram to squeak through. It’s a gain of nine yards on first down.

Skura is in a similar boat as Karras and McGovern. He is a solid, but unspectacular young center. If he receives a deal similar to the one Spotrac expects him to get, that would probably wind up being a massive overpay for the team that doles it out. Since he is a restricted free agent, Skura’s new team would have to give up a draft selection for him as well. Skura has certainly not yet proven to be worthy of an investment like that, but that’s the nature of free agency. Decent starters get paid like great ones.

The Jets desperately need to upgrade the center position. Using a draft pick on the spot is a must, but it is never prudent to rely solely on the draft to fill a position. You do not want to go into a round with the mentality that you have to pick a certain position. That leads to the bypassing of better talent, which in the long-term hurts the team. You also do not want to go into the offseason without a security blanket in case your rookie does not appear ready to handle a starting role yet.

Picking up an outside addition to at least provide competition is the smart way for the Jets to go. Will Skura, Karras, or McGovern be the answer? Each player would be a substantial upgrade for the Jets, but they also might be too expensive for a stop-gap role and at the same time not quite good enough to be a long-term answer at the prices they will demand.

It depends on how the Jets want to handle this position. If they want to be as certain as possible they are adding one of the best players available, they will most likely have to bite the bullet and hand out a bigger-than-ideal contract to one of those three. They could (and should) still draft someone at that point, but the free agent pickup could turn out to be wasted money down the line if he is replaced by the draft pick. Nevertheless, it can be argued that taking as many shots at the dartboard as possible is the right way to go. All that matters in the end is finding the one player who proves to be a solution. Buying more lottery tickets only increases your odds of finding the one winner.

Or, they could go with a dirt-cheap, backup-quality option like Stefen Wisniewski simply to provide depth and security, while relying on the draft to find their center of the future.

The best-case scenario would be Skura, Karras, or McGovern turning out to demand a cheaper deal on the open market than expected, and the Jets signing them to a low-commitment agreement. That would allow the Jets to upgrade while not having to tie themselves too tightly to a player that is probably just average, giving them the flexibility to groom a homegrown prospect until he is ready.

But that would be a perfect world, and we all know the Jets do not live in one of those. Joe Douglas is going to be faced with some very, very interesting decisions at the center spot in the coming months.