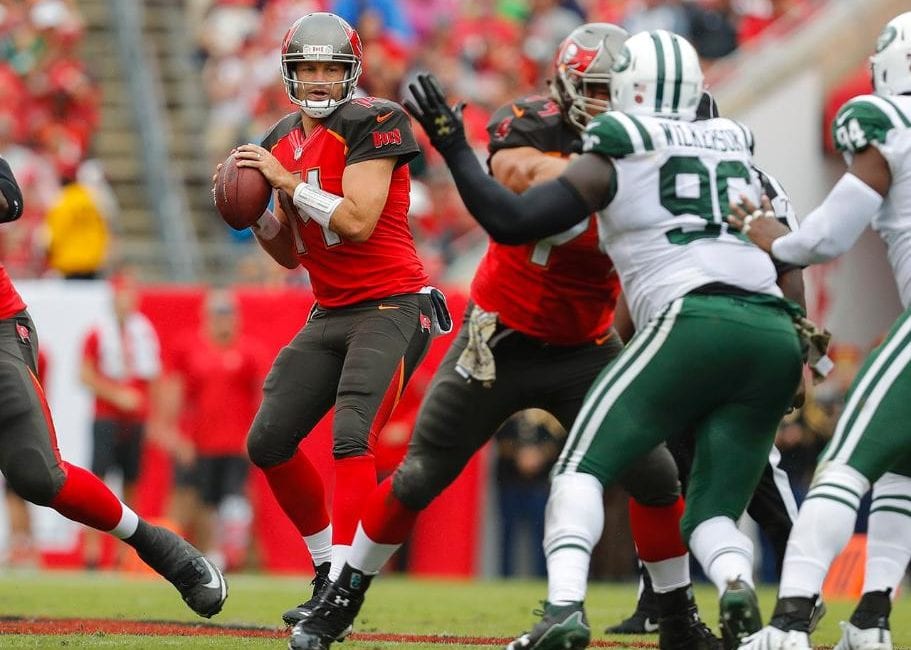 Tampa, FL – Ryan Fitzpatrick got revenge on the New York Jets as he led the Tampa Bay Buccaneers to a 15-10 victory over his former team.

Offense for both Tampa Bay and New York were nonexistent in the first half. The first three drives for the Jets were three-and-outs, only broken up by an interception from Brent Grimes. The Buccaneers scored a field goal early in the first quarter to put them up 3-0, but they squandered the Grimes interception by throwing an interception to Darryl Roberts. Chandler Cantanzaro kicked a 47-yard field goal at the end of the second quarter to tie the game at three.

The Buccaneers took control of the game following halftime. Their first drive of the second half resulted in a 49-yard field goal, putting them back out front, 6-3. After four three-and-outs between the Jets and Buccaneers, Bilal Powell fumbled the ball at midfield that the Bucs recovered. That set them up for a 37-yard field goal that extended the lead, 9-3. The lead grew to 12-3 with a 37-yard field goal late in the third quarter.

The Buccaneers put the seal on the game in the fourth quarter. After forcing the Jets sixth third-and-out of the game, Tampa Bay drove to New York’s six-yard-line where Fitzpatrick threw a short pass to Charles Sims III and ran it into the end zone for a touchdown. They went for a two-point conversion, but failed. The score increased to 15-3.

The Jets weren’t about to go away quietly. Despite failing on a fourth-down conversion, they got the ball back after the two-minute warning. The Jets got the Bucs’ 38-yard-line where Josh McCown launched the ball to Robby Anderson in the end zone for a touchdown. The Jets cut the score to 15-10, but the Buccaneers recovered the onside kick and kneeled it for the win.

The Jets (4-6) will have an extra week to game plan before hosting the Carolina Panthers on Nov 26 at 1:00 pm.

Asomugha On The Block,Balancing The Hype Vs Hate 3,Jets Bring Back Jeremy Kerley On One Year Deal,Tracking Jets Signing Of Un Drafted Free Agents,Amid Frustrating Performances Cromartie Continues To Step Up As A Leader,Week Two Preview Jets 1 0 Vs Dolphins 1 0,Jets Fans Need To Be Patient With Mekhi Becton,Leveon Bell Doesnt Want To Be Held Back,Jets Defense Preparing To Face Raiders Offense Not Rookie Quarterback,Penalties Hurting Jets Chances Of Winning