JetsInsider.com > News > Blogs > Looking for the Bright Side of the Adam Gase Hiring

Looking for the Bright Side of the Adam Gase Hiring 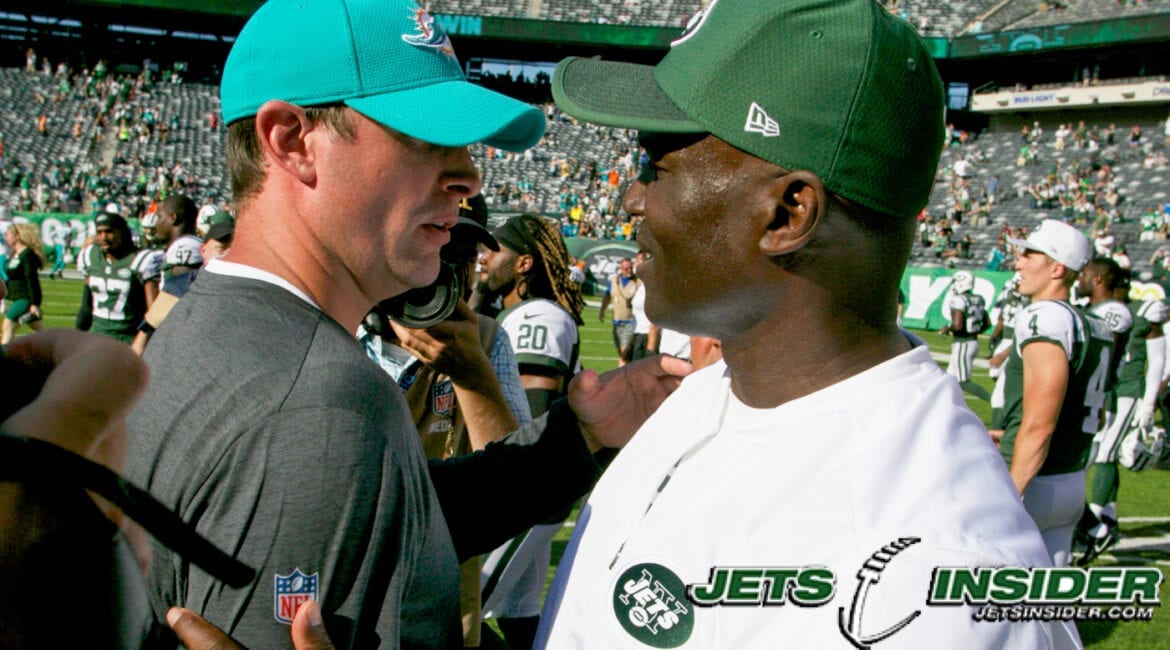 I don’t believe the Jets made the correct decision by hiring Adam Gase, luckily for Jets fans my opinion means absolutely nothing when it comes to whether or not Gase will succeed here. Right now all we can do is look at what happened down in Miami and try to imagine why it would be different here and I can only come up with one certain difference; Sam Darnold is a better quarterback with more potential than Ryan Tannehill, Jay Cutler, Matt Moore and Brock Osweiler combined. Maybe that’s the only difference that matters.

My main concern with Gase isn’t in his play-calling or how smart of football mind he is, it’s with the way he got along with others. When Frank Gore, Kenny Stills and Cameron Wake are reportedly complaining to ownership about the coach, that’s a problem. These aren’t “divas” or “problem children,” these are well respected and extremely hard working veterans. Sure you can find a report here from the Miami Herald’s Barry Jackson that says “the narrative that former Dolphins coach Adam Game was widely disliked by his team is not accurate.” But Jackson went on to say Gase “had a lot of supporters in that locker room,” yet the only proof of that is one Albert Wilson tweet. The rest of the article is about complaints that players in the locker room had about Gase.

Wilson tweeted: “A full year, I could have shown much of a genius he was.” That sounds promising but it’s also incredibly easy to understand why Wilson felt that way. Wilson signed with the Dolphins last offseason after playing for the Chiefs, Wilson wanted more playing time and he found a team that would give it to him in Miami and to Gase’s credit he got the absolute most out of Wilson and his speed. Gase employed a short-passing attack to put Wilson and Jakeem Grant in position to have wide open space in front of them when they caught a short pass from Tannenhill to make big play after big play. It was working, in fact it was working so much that people were starting to give Gase credit for getting so much out of Tannenhill even though many of the big passing plays were just extended handoffs. This isn’t a criticism of Gase, he realized the limitations of his starting quarterback and found speedy receivers to put around him to get the most out of a quarterback he couldn’t fully trust. Which leads me to think that the Jets were thinking if he can do that, imagine what he can do with a quarterback that he can actually trust.

Wilson suffered a season-ending injury at the end of October and the Dolphins offense didn’t look the same the rest of the season. Wilson wasn’t the only injury Gase had to deal with of course, but that will be the case here with the Jets and for every coach everywhere else. The defense of Gase that holds the most merit is to simply say, look at the quarterbacks he had to play in Miami. Tannehill has spent his entire career making people wonder if he’s simply an okay quarterback at most or does he have potential to be a better than okay quarterback, Gase did a decent job getting the most out of a healthy Tannehill but he rarely had a healthy Tannehill. Tannehill played well in his first year under Gase, but got hurt at the end of the season and the Dolphins had to turn to Matt Moore in the playoffs. Tannehill missed all of last season with an injury, which had the Dolphins pull Jay Cutler out of retirement, and when Tannehill hurt his shoulder this season Gase was forced to turn to Osweiler and had Osweiler looking better than he has ever looked before, still not good mind you but better.

It’s been reported that Peyton Manning had a conversation on the phone with Jets Owner Christopher Johnson and his recommendation is what cemented Johnson’s decision to hire Gase. A recommendation from Peyton Manning obviously means something, but how much? After all Manning gave the same recommendation to Dolphins Owner Stephen Ross when the Dolphins hired him. Gase spent one year as Manning’s coordinator in Denver and that was the year that Manning set an NFL record with 55 touchdown passes, but how much credit are we giving Gase for that? The reason Sean Mcvay gets the credit he does is because we saw what Jared Goff looked like in year one without McVay and then saw the difference in year two with McVay. We’ve all seen Manning have plenty of success before Gase so you can’t say he developed Manning. But he was with him and spent time game-planning and drawing up plays with the most cerebral quarterback we’ve ever seen, if nothing else the “teacher” in this scenario had to learn a lot from his “student.” You could see some of that in Miami but only glimpses because of how bad the quarterback situation was down there, Darnold is obviously not on Manning’s level but he’s many levels above what Gase had to work with in Miami and it’s easy to see why the Jets thought Gase would be good for Darnold.

Still the concern has to be about Gase’s abrasive personality, his ‘my way or the highway/get onboard or get out’ philosophy. It’s one thing for Bill Belichick to do that, players buy into that before they even walk inside the Patriots facilities, but it’s really hard to get players to buy in by implementing such a philosophy without racking up the wins first. They will likely give it a chance and roll with it if it works, just like they did in Miami when they made the playoffs in year one, but if you don’t have a history of winning the players will turn on that philosophy as soon as the losses start piling up again. What the Jets have to hope will be the difference here is Ross empowered Gase in Miami, he let him make roster decisions and overrule others, Gase will not have that type of power here. Maybe Gase has learned that he needs to ease up, at least a little bit, maybe he decides to focus his energy on play-calling/game-planning and less on seeking power.

If Gase can take a step back and put all his energy on developing Darnold and drawing up the best possible game-plan week in and week out the hire has potential to work. He’ll need help from Mike Maccagnan, who needs to do a far better job of bringing in talent than he did for Todd Bowles, otherwise we’ll hear the same defenses of Gase that we heard in Miami and the same defenses that we heard of Bowles after the 2017 season.

The Jets clearly felt things will be different for Gase here than they were in Miami, maybe the only difference that matters is Sam Darnold.