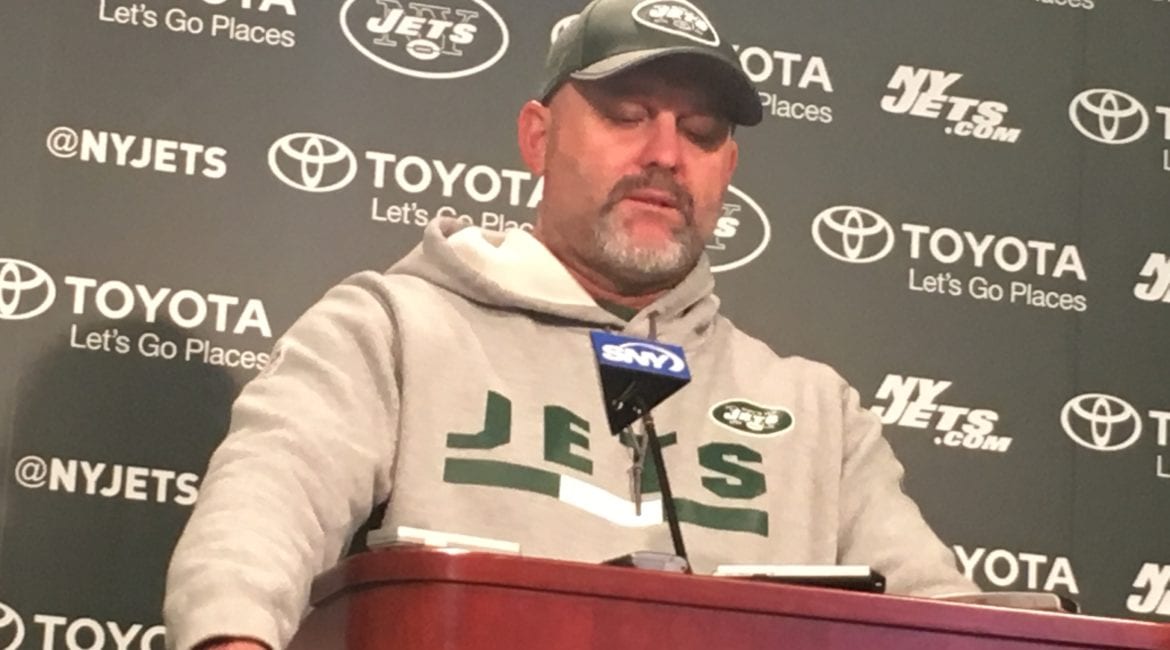 Florham Park, NJ – Last week’s 23-0 performance for the New York Jets was disappointing. In addition to losing their starting quarterback Josh McCown, the Jets couldn’t score a single point against the Denver Broncos. Offense, however, wasn’t the only aspect they struggled in. The Jets’ defense couldn’t beat the Broncos in the one defensive area that most teams have been able to beat Denver in: the turnover battle. The Broncos forced a fumble and an interception early on in the game while scoring again and again. Here’s a review of offensive coordinator John Morton and defensive coordinator Kacy Rodgers as we look ahead to this Sunday’s matchup against the New Orleans Saints.

Strength: Robby Anderson – It seems like a broken record to highlight Anderson’s performance at this point in the season, but in a game where the offense was limited, there’s no choice but to focus on him. Anderson caught three passes for 27 yards. Anderson continues to show how reliable of a target he can be for the Jets’ passing offense. For a guy that went undrafted out of Temple in the 2016 NFL Draft, Anderson’s rise to stardom has been exponential.

Weakness: Rushing Game – Bilal Powell had the best performance of any offensive player on the team against the Broncos, but it’s still a subpar performance. Powell rushed for 35 yards on 13 carries. The three-back system is hurting the Jets. Spreading the carries around doesn’t allow Powell or Matt Forte or Elijah McGuire to rush for a lot of yards or score a lot of touchdowns. In the end, the system is not only hurting the running backs, but also the offense in general.

Focus: Get Bryce Petty Ready – After McCown left the game against Denver, Petty was inserted into the game. Cutting Petty some slack, he was thrown into a game after it was clear McCown would be the starting quarterback for the rest of the year. At the same time, though, any backup quarterback should be ready in the chance that the starting QB has to leave the game, and Petty wasn’t. He went 2-for-9 for 14 yards. Morton made it clear that he worked with Petty throughout the week to get him ready.

“We put the plays in, we talk about it just like we do with Josh (McCown) and we’ll wait until the end of the week and see what he likes and what he doesn’t like and then we’ll go from there.”

Sunday against the Saints will be the evaluation period, not just for Petty, but for Morton as well.

Strength: Rush Defense – The rush defense has come a long way since the start of the season. Very few people would’ve guessed the Jets defense would hold CJ Anderson to less than 50 yards, but that’s what they did. Demario Davis led the Jets in tackles with 13 total. Darron Lee and Jordan Jenkins each had four solo tackles. Credit should also go to the defensive line. Muhammad Wilkerson led the defensive line in tackles with six total while Steve McLendon had five. Having a front seven that can stop the run is a vital part to winning a game, and the Jets have it.

Weakness: Morris Claiborne – It’s not fair to single out a player, especially when the defensive backfield struggled as a whole, but there were times in the game where you would watch the game and wonder why Claiborne missed a coverage. There were a couple instances of this. For example, the first touchdown scored by the Broncos was thrown to Demaryius Thomas, Claiborne’s assignment throughout the game. He knew Thomas beat, but made a last-ditch effort to make the reception difficult for Thomas, and, as a result, drew a penalty. The penalty was declined, so it didn’t matter, but you’re left to wonder if Claiborne wasn’t beat, could he deflect the ball away and prevent the touchdown. Another instance during the game was when Emmanuel Sanders got a first down on a third-and-long situation. Sanders caught the ball in front of Claiborne, but Claiborne didn’t tackle him until he got the first down. Against the Chiefs, Rodgers cited technique as the reason the secondary gave up those touchdowns. You wonder if Claiborne still struggled with technique this week.

Focus: The Pass Defense – This is a no-brainer. This is a team that’s led by a Super Bowl-winning quarterback in Drew Brees. Rodgers understands the challenges that Brees and the Saints offense presents.

“He’s their experienced leader. When you look at their weapons and their offense. Two receivers, the two-headed monster in the (backfield), and their offensive line is playing really well. He’s doing an excellent job moving the ball around, getting them in the right play, changing the tempo. He does all the things veteran quarterbacks do.”

But explaining a problem and actually solving it are two different actions. Since coming off the bye week, the Jets defense has allowed more than 20 points in each game. Against a offense like the Saints, 20 points is their score at the end of the first quarter. Rodgers and the secondary will have their work cut out for them against the Saints.