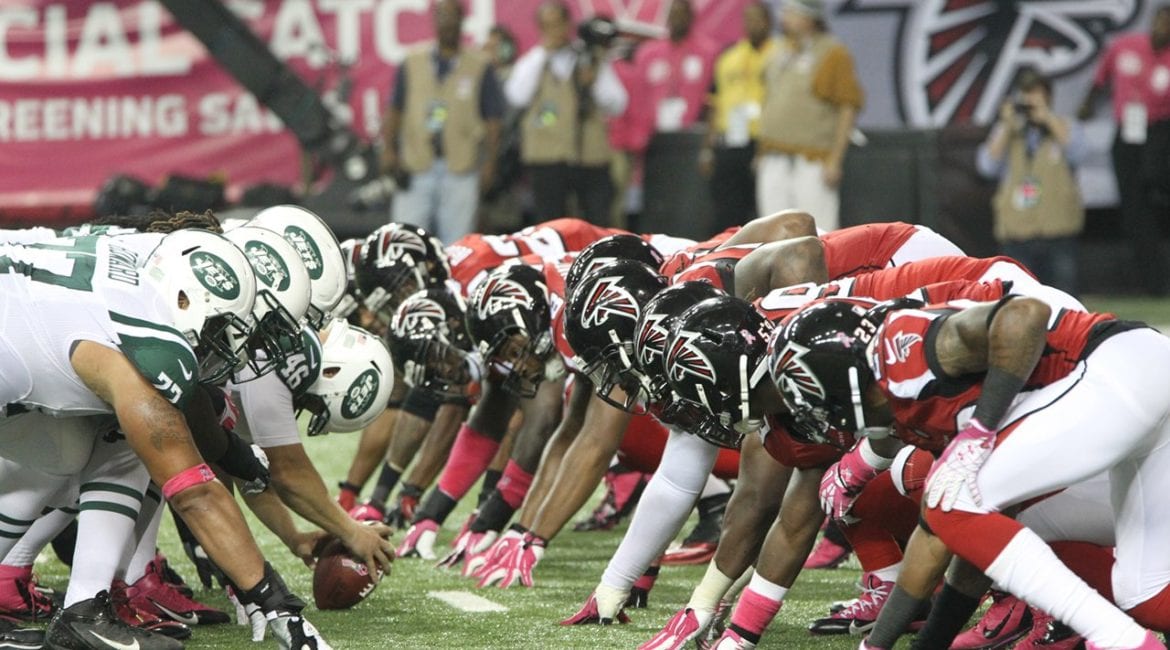 East Rutherford, NJ – Week 8 of the NFL season pits the New York Jets against the defending NFC champions Atlanta Falcons. Last Sunday, the Jets relinquished a 14-point lead in the fourth quarter of their 31-28 loss to the Miami Dolphins while the Falcons dropped their Super Bowl rematch against the New England Patriots, 23-7.

This meeting marks the 12th meeting between New York and Atlanta. Atlanta holds the slight 6-5 lead in the series. 2013 was the last time the Jets and Falcons met, and it was the Jets who came out victorious, 30-28. Here’s what to watch for during the game:

Matt Ryan vs Jets’ Secondary: If Miami’s fourth-quarter offensive explosion taught Jets fans anything, it’s that the Jets’ secondary will have a tough task of slowing down the Falcons pass offense. Kenny Stills came out of nowhere, taking advantage of Buster Skrine and tallying 82 yards and a touchdown on six receptions last Sunday. Julio Jones and Mohamed Sanu will create more problems for Morris Claiborne and whoever steps up in Skrine’s absence. The Jets secondary doesn’t just need to step, but they’ll need to take the best game they played the best and double the effort.

Devonta Freeman vs Jets’ Rush Defense: The good news is the Jets’ rush defense has improved since the start of the season. Since Week 3, they’ve limited opposing running backs to just 3.42 yards per carry, the sixth-lowest average in the NFL since then. In addition, the Jets are the only team to allow one carry over 11 yards since Week 3. The bad news is Devonta Freeman is different from some of the running backs the Jets’ faced so far. He helps the Falcons balance their offense so Ryan doesn’t have to throw the ball all the time. His main role is to pick up yardage and shorten the field, but he can break a few tackles and make a big run for the end zone. Darron Lee and Co. will have their hands full this game.

Josh McCown vs. Desmond Trufant: Josh McCown has surprised Jets fans with his accuracy this season. His completion percentage stands at 69.2 percent, which is in the Top 10 in the NFL. Much credit goes to Jermaine Kearse, who came to the Jets before the start of the season in a trade for Sheldon Richardson. Kearse leads the team in receptions with 27. However, McCown will have to look for other options because Trufant will be all over Kearse in the game. That leaves the door open for Austin Seferian-Jenkins, Robby Anderson, or Jeremy Kerley to step up and have a huge impact on the game.

Matt Ryan: Ryan isn’t the same quarterback that led the Falcons to the Super Bowl last year. In fact, his number are similar to McCown’s. Both have 1,590 yards, but McCown has a better QB rating, 91.5 to Ryan’s 89.3, and more touchdowns, 10 to Ryan’s seven. A lot of that has to do with the lack of protection Atlanta’s offensive line has given to him. Ryan has been sacked eleven times this season for 78 yards. If the Jets can take advantage of the Falcons’ weakness, it’ll be harder for Ryan to get the ball to Jones or Sanu for large gains.

Matt Forte/Bilal Powell: While McCown and Kearse have their hands full with Trufant, the Jets will look to their running game to give them an edge. Forte had an run last week against the Dolphins in which he broke four tackles to get the Jets a first down on a third-and-18. Powell made his return to the Jets last week after a injury kept him out against the Patriots. While his stats weren’t spectacular, he did lead the team in rushing yards with 43. Look for Forte and Powell is have a huge impact in the rush offense.

The Jets’ misfortune will continue. Fans knew this last three games were the toughest part of the schedule. New York hosts the two teams that played in the Super Bowl last year and visited the Miami Dolphins at Hard Rock Stadium where they have yet to win. While the Falcons have lost three-straight, their stretch doesn’t define how talented this team is. Jones is too fast for Claiborne to cover and Ryan will have plenty of time to find him down the field for a big gain, Freeman will gain the necessary yards to put Atlanta in a good position, and Trufant will be like a blanket over Kearse, causing McCown to find other receivers.