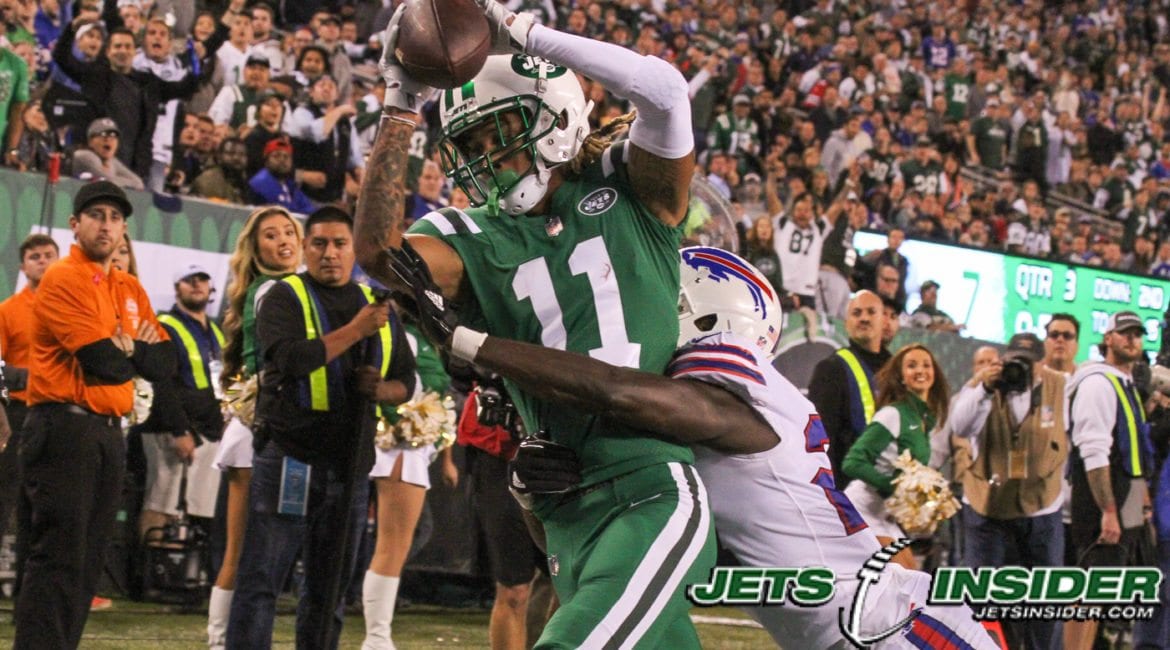 It felt like Throwback Thursday at MetLife Stadium. There was a vintage pass rush, ground-and-pound, and Fireman Ed was back leading around 80,000 raucous Jets fans in the classic J-E-T-S chant. If you asked me, this team and that performance resembled one that occurred when the organization went to back-to-back AFC Championship Games in 2009 and 2010. How much fun was that to witness?

The fact is, the New York Jets are 4-5 in a year many picked them to be winless. Each and every week, this young and exciting team comes to play, lays everything on the line and competes. The team said it after their first win of the season against Miami – when the “New York Jets” come up on a schedule, it is to not be taken lightly. After watching Thursday night’s Jets-Bills tilt on the national stage, the league now knows, don’t sleep on the Jets. They won in dominating fashion

The Jets eventually did what they have done the past three weeks; give up 14 points in the second half. But, all went well. Their lead was built on hard work for three quarters that a few lapses here and there wouldn’t be the end of the world. In sum, the Jets saved their season on Thursday, much to the dismay of the pro-tank crowd. They played fundamentally sound, even if they were flagged 10 times for 66 yards. The Jets dominated and then danced on Buffalo’s grave. In Editor-in-Chief Chris Nimbley fashion, let’s get to handing out game balls.

Can we give it to the entire team?

Matt Forte – Just days after Forte complained about the Jets abandoning the run in a rain-soaked loss to the Atlanta Falcons, the veteran running back got his wish. He cut. He deked. He spun. He was the Matt Forte of old. He looked elusive and fresh on a short week. There’s no question, Forte should not be getting the bulk of the carries out of the backfield on a weekly basis. It should be Bilal Powell and Elijah McGuire’s job. But, in a limited role, Forte will thrive like he did on Thursday night to the tune of two touchdown runs and 77 yards on 14 carries. For that blast to the past, Forte gets the first game ball.

The Entire Jets Offensive Line – No unit has been more up-and-down this year than the Jets’ offensive line. It has looked bad at times, while other occasions; they turn in a performance like they had on Thursday. Four days after the unit allowed three sacks for a loss of 21 yards and failed to open holes for their running backs, the line came together and outmuscled the Bills’ pass rush and rush defense. Josh McCown was sacked once and the Jets running backs grounded-and-pounded their way to 181 yards on 36 carries. Who was on the offensive line? D’Brickashaw Ferguson, Nick Mangold, Alan Faneca and Brandon Moore? Try Wesley Johnson, James Carpenter, Brent Qvale, Ben Ijalana and Kelvin Beachum. Excellent job. This unit takes home the second game ball.

Darron Lee, Jordan Jenkins and Demario Davis – These three were monsters in the middle of the field, in particular, Lee. He had a team-high seven tackles, three tackles for a loss, one sack and two quarterback hits. Could this be the turning point of his young career? Lee has taken a lot of slack from the media and fans but he showed up to play. Believe it or not, he has been showing signs for weeks. According to PFF, Lee’s three highest graded games of his NFL career: Thursday night, Sunday vs. Atlanta and two Sunday’s ago in Miami. He looks like a legitimate inside linebacker. For that performance, Lee gets the third game ball. Oh, by the way, maybe the Jets found their outside pass rusher in Jenkins.

The Entire Jets Defensive Line – “Joe, that’s a cop out. You can’t give two entire units a game ball.” Well, I guess you didn’t watch the game, then. The offensive and defensive line both deserve a game ball. Muhammad Wilkerson, Leonard Willams, Steve McLendon and Kony Ealy turned in a performance that we haven’t seen since Week 1 of 2016 against the Cincinnati Bengals. They swarmed and made Buffalo’s offensive line look silly, numerous times. Tyrod Taylor was sacked five times in the first half, then twice in the second half. That’s the “most a Bills quarterback has been brought down in a first half in 16 years.” LeSean McCoy was a disaster, too, compiling 25 yards on 12 carries. It was pure domination from start to finish.

Fireman Ed – MetLife Stadium rocked like it hasn’t in years. Fireman Ed made his return and the J-E-T-S chant was back. Say what you want about Fireman Ed. The stadium hasn’t had THAT atmosphere in quite some time.

The Jets are one game out of the Wild Card. Sure, their schedule gets more difficult next week. But, after Thursday night’s performance, anything is possible.

Also, how great was this video?

ICYMI: It was lit. #FridayFeeling pic.twitter.com/8UZQoqDmpN