Victory Tuesday: Game Balls for Everybody 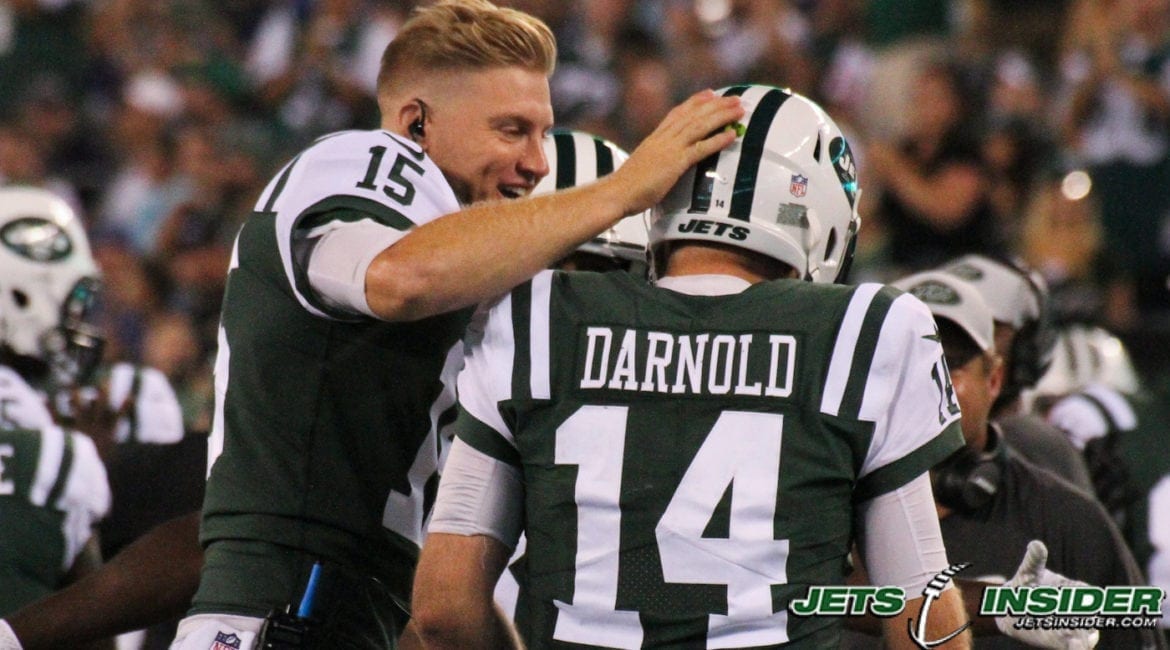 Things couldn’t have possibly looked worse for the Jets after the first play of the season, Sam Darnold threw across his body, off his back leg and floated a pass to Bilal Powell that was easily picked off by Lions safety Quandre Diggs before he sauntered into the end zone for a pick-six and an early 7-0 Lions lead. There was nowhere to go but up from there and up the Jets went leading us to start the 2018 season with a Victory Tuesday.

The Jets leaned on the running game to let Darnold settle into a rhythm then once he settled in they turned him loose. The defense played lights out, hauling in five interceptions including one Trumaine Johnson immediately fumbled back to the cuddly cats and a pick-six by Darron Lee, and completely shut down any hopes of the kittens with the fluffy manes establishing any sort of rushing attack. The offensive line protected Darnold and opened up huge holes for their running backs and the receivers made plays when called upon. Then to top it off special teams turned all the way up and for the first time in a long time, contributed to a win instead of a loss. Game balls for everybody, but let’s try to narrow it down as much as possible and focus on the standout stars of the game.

Darnold – That pick-six to start the hame, and his career, was pure nightmare fuel. Jets fans everywhere threw whatever was within reach as they screamed and cursed before laughing uncontrollably like a maniacal mad man because, what else can you do? But as myself and others have repeatedly told you, one of Darnold’s most impressive traits in college was his ability to not let mistakes carry over to the next play and now you’ve seen the poise us reporters have been gushing over in an NFL game. Darnold ended the game going 16-21 (76 completion percentage) for 198 yards, two touchdown and one interception with a QB rating of 116.8 and a QBR of 82.9. Those are impressive numbers for any rookie quarterback, especially a 21-year-old rookie whose first pass was a six-pick. It’s not always going to be pretty with Darnold this year, he’s going to have his brain fart moments but last night fans saw exactly why the organization is so excited about Darnold’s potential.

Quincy Enunwa – All offseason long you fans had to listen to the national media repeat the falsehood that Darnold had no weapons to work with, it didn’t matter that most of the Jets beat laughed at such nonsense and tried to reassure you that, Darnold does indeed have enough weapons it still had to be frustrating to listen to the national media so quickly dismiss Enunwa and Robby Anderson. And I stopped before listing Jermaine Kearse (who didn’t even play last night) and Terrell Pryor as well as the running backs and tight ends because if anyone looks and sees Enunwa and Anderson at the top of the depth chart and somehow thought that equals “no weapons” they deserve to either admit that they just simply haven’t bothered paying attention to the Jets these past couple of years or they need to find a new job.

Darnold only threw for 198 total yards so it’s not like they receivers put on some type of dominate performance, but they made the plays exactly when they needed to and showed up right on time. Anderson only had one catch, but it was a 41 yard touchdown catch that once again showed off his ability to stretch the field and burn defenses deep. Anderson’s touches will probably be few and far between for the first stretch of the season as Darnold’s biggest weakness is throwing the deep ball, but whenever the Jets decide to take that shot Anderson will likely toast the poor corner tasked with staying in front of him.

As great as Anderson is at what he does, and he is great at it, Enunwa is already looking like Darnold’s best friend. Enunwa is such a matchup nightmare for defenses and is so incredibly dangerous once the ball is in his hands, he had six catches for 63 yards and a touchdown that came on a short pass that Enunwa took and fought his way into the end zone on with some help from a nice block from rookie tight end Chris Herndon. The Jets aren’t in the discussion for best receiving core and the doubters will need to see more to become believers, but in due time they will become believers because this is a talented group of weapons.

Running game – On both sides of the ball the Jets dominated in the running game. On offense they ran the ball 36 times for 169 total yards (4.7 yards per carry and that includes the Anderson end-around for a nine yard loss) and two touchdowns, including a 62 yard touchdown romp by Isaiah Crowell. On defense the Jets played the role of Jerry just stymieing Tom the helpless cat over and over again, only allowing 39 rushing yards on 15 carries (2.6 yards per carry).

The ability of the Jets to establish the running game early really helped Darnold settle into the game, wear down defense and ice the game at the end. Steve McLendon was the anchor on defense, but all 11 men swarmed to the runner on each attempt and prevented a struggling Matt Stafford from being able to use the running game to prop up his passing game.

Darron Lee – Lee has heard/read all of your criticism and last night he responded with the best game of his career. Seven total tackles, six solo, two interceptions and one of them returned for a touchdown. After the game Lee and a number of his teammates said they knew what plays the Lions were running based on formations and hand signals from Stafford and it sure looked like it. He made great reads on both plays, but the second interception, the non-touchdown interception, Lee showed off his freakish athletism as he leaped in the air to snatch the pass. Lee has struggled in coverage throughout his time as a Jet, but last night he was simply outstanding.

Henry Anderson – With their seventh-round pick in the 2018 draft the Jets traded for Henry Anderson, Anderson could never play another snap again and the Jets will still win that trade after last night’s performance. The defensive line as a whole was impressive, Brandon Copeland and Frankie Luvu chipped in impressive performances as well, the entire defense was getting good push and being disruptive but Henry Anderson was absolutely dominate and provide a much needed pass rush. His rush on Stafford is what led to Lee’s pick-six.

Andre Roberts – All three phases of the game. For the first time since Brad Smith was a Jet the Jets won the special teams battle in decisive fashion. Roberts had a big 43 yard return to set up the Jets first touchdown then somehow, spectacularly managed to keep his balance as he sprinted down the sidelines and stay in bounds on his way to a 78 yard return for a touchdown. No mistake, botched punts or missed field goals either, this was just a complete beatdown in all three phases.

Todd Bowles – I have been very critical of Bowles these past couple of years and I’m sure I will be again, but I will always give credit where it’s due and Bowles absolutely deserves credit for having his guys ready to play last night. He also gets credit for his players saying they knew what plays were coming, we will see if this lasts but today Bowles gets a game ball.