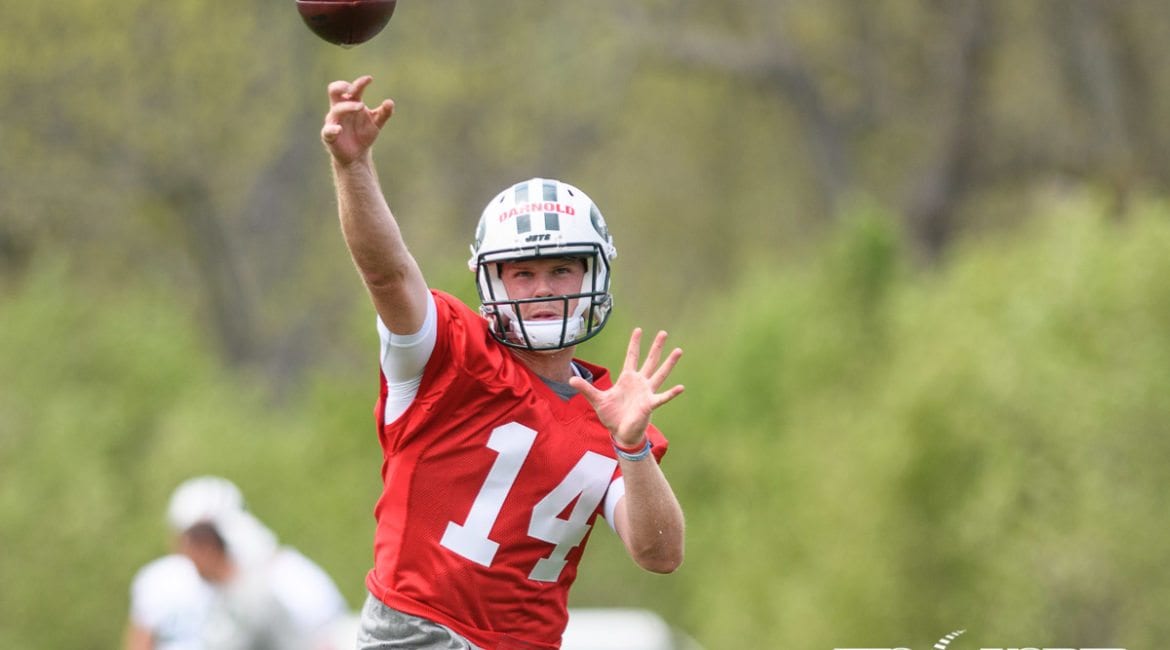 Florham Park, NJ – Day six of training camp came with hopes that the team’s progression would continue on both sides of the ball but the weather would not cooperate. Halfway through the day, rainy weather moved in, forcing the outdoor practice to be cancelled. But the team’s momentum carried forward to the inside facility as the players continued to practice their drills on both sides of the ball. As a team, Gang Green had a solid day with much improvement from the last two days of practice. Here are some insights on the team’s development and a quick look at what occurred in practice today.

Since entering training camp, Sam Darnold has struggled, looking like he was mentally a step behind. Showing up three days late to camp didn’t help his cause. Today, the rookie quarterback took huge strides improving his game with much success during drills and team scrimmages. Darnold’s day started during passing drills where on his first throw of the day he hit fellow rookie Chris Herndon for a 30-yard catch. He finished the drill 28 for 30 with two incomplete passes coming from an underthrown pass to Clive Walford and a dropped pass from Terrelle Pryor. During 7-on-7’s, Darnold once again impressed coaches, finishing seven of eight. He showed impressive vision when he found Jonah Trinnaman wide open in the middle of the field for a 15-yard pass. Darnold would follow up by throwing five passes during 11-on-11’s, but only completing two. Maybe he still needs some time to adjust to the speed of the players but one pass was a beauty of a spiral to wide receiver Jermaine Kearse in double coverage. Though he wasn’t perfect during 11-on-11’s, the rookie would put on a show during goal-line drills. Out of the three quarterbacks, none could compete with Darnold who finished four for five through the air, throwing four touchdowns on four play-action passes. He would also rush for a touchdown of his own.

Darnold looked calm, cool and collected when he had the ball in his hands today. He didn’t take many chances through the air, checking down receivers and taking time deciding where to throw. He would wait to make his throw once the receiver made eye-contact with him, which could be a sign that chemistry is emerging. Steps like these make you feel good about the strides the rookie is making.

Trenton Cannon Leads The Way as a Punt Returner

During the 2017 NFL season, the Jets used four different punt returners, never settling on who the starting returner would be. This season, four new names are in a competition for the position as the starting punt returner. Wide receivers Andre Roberts and Lucky Whitehead, along with running backs Trenton Cannon and Isaiah Crowell, are now positioned to be the potential punt returners for the 2018 season. At the beginning of practice, each player returned three punts and had to dissect where the open holes on the field were as the defensive players rushed down the field. Each man completed the drill, but rookie Trenton Cannon stood out. Cannon was a lot faster than the other three players and was able to slip through tight gaps using his speed before anyone could put a hand on him. With fellow running back Elijah McGuire out with a fractured foot, Cannon has really stepped up on the field, both as a punt returner and a running back.

Cannon is competing against three other players with previous NFL experience. After practice, Cannon talked about his role as a returner, saying, “I’ve learned a lot about being a punt returner and kick returner. I didn’t return a lot of punts in college, so I’ve greatly improved in being a punt returner.” Cannon also said he has learned much from his teammates when it comes to returning punts and hopes his speed sets him apart from them.

It’s no surprise that the Jets defense has some standout players with noteworthy defensive intelligence. But today, the defense really used teamwork to get the job done. On the first play of 11-on-11 drills, the linebackers identified and called out a play-action pass before quarterback Josh McCown faked the run and dropped back to pass. No players fell for the trick. The next two plays resulted in a loss of yardage when members of the secondary read the play and identified subsequent sweep and dive runs.  Jets defensive members were pumped up and had nothing but positive words for each other, which really shows how chemistry is developing. When first team members watched the second and third-team defensive squads from the sidelines they would try and amp their teammates up.  Jamal Adams, was the most vocal member of the secondary today and everyday. Not only did he call the audibles on defense, he would give advice to the newest members of the team after plays were completed.

Starting nose tackle Steve McLendon had a day of rest today, watching practices from the sidelines. Wide receiver Tre McBride collided hard with the field goal post while attempting to catch a deep pass where Darnold overthrew him. McBride stayed out of practice for a few minutes but would return and resume running routes with the team.