Jets rumble and roll past Bills 34-21 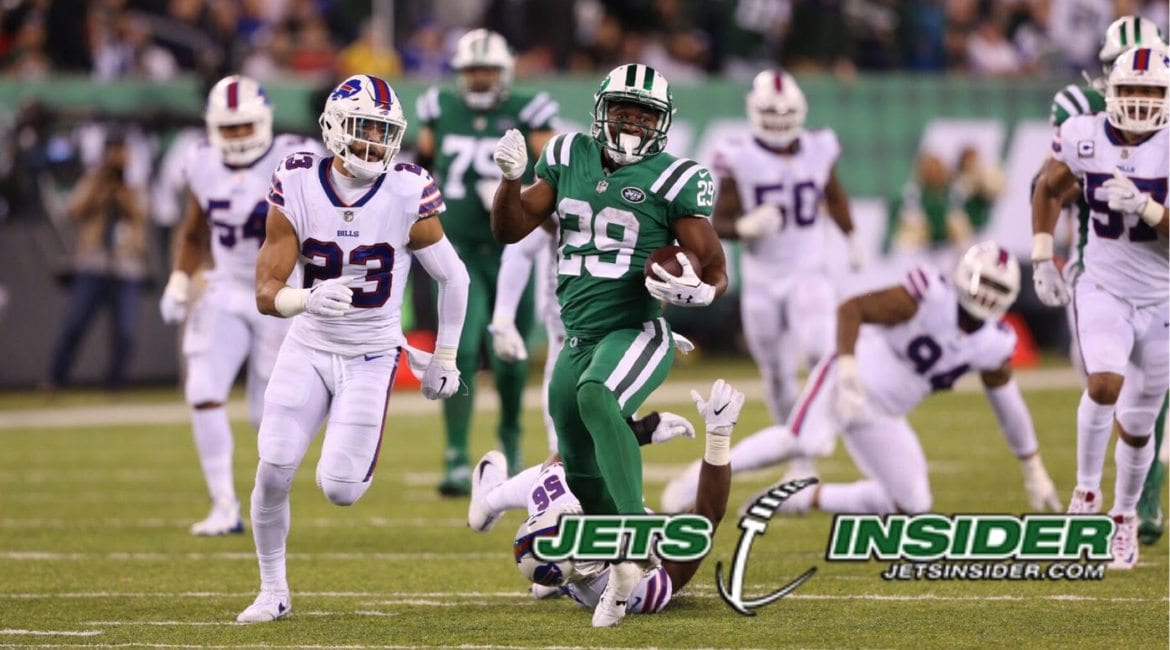 EAST RUTHERFORD, NJ – The Jets backfield committee rushed for over 190 yards and the New York Jets pulled out the 34-21 victory over the Buffalo Bills on Thursday night. The win moved New York to 4-5 on the season and a game behind the Jacksonville Jaguars for the final wild-card spot. The Bills dropped to 5-3 and trail the Patriots by a game in the AFC East.

Trying to avenge a 21-12 opening day loss to Buffalo, the Jets offense controlled the line of scrimmage while Gang Green’s pass rush terrorized Bills Quarterback Tyrod Taylor all night. Taylor was sacked seven times, five of those in the first half.

Josh McCown finished 14-20 passing for 140 yards and a pair of touchdowns; one through the air, the other on the ground. McCown’s legs got the scoring started as the 38-year old scrambled for a 10-yard TD. After the Bills answered on a Zay Jones TD Catch, and a Catanzaro field goal to give New York the 10-7 lead, Josh McCown threw a beautiful 25 yard TD Pass to Robby Anderson. It was Anderson’s fourth touchdown catch of the season.

While McCown was efficient in the passing game, the night belonged to the Jets defense and running game.  Matt Forte ran for 77 yards and two touchdowns while Bilal Powell powered his way to 74 yards. Powell’s 51-yard rumble set up Forte’s first score. Elijah McGuire closed out the fourth and totaled 30 yards rushing on 13 carries. In total, the Jets fan for 197 yards against a run defense that came into today giving up the third least amount of rushing yards per game (80.1).

The Jets offensive line dominated while the Gang Green’s defense made life miserable for Tyrod Taylor and the Bills. The Jets defense forced three turnovers while getting in Tyrod Taylor’s face all night. Along with the seven sacks, Taylor was hit 11 times while also fumbling the ball late in the contest. It was a dominating performance from the young guns on the defense, but Safety Marcus Maye believes there were still some things missing.

“It wasn’t complete (game). We gave up those last couple drives at the end of the game. It wasn’t a complete ballgame at all. But we did a great job at the beginning of the game of coming out fast. Throughout the majority of the third and fourth quarter, we were just playing fast so it was a good game.”

Starting defensive lineman, Steve McLendon tallied half a sack in the victory and believes that this game was exactly what the unit needed.

“Every game is a must-win. If you want to go where we are trying to go, and where we want to go then every week is a must-win. You have to do the main things like playing fast and playing smart and know your assignments. You gotta play your technique to the best of your ability. I feel like what we did was just a first step of heading back in the right direction from the three-game losing streak but it was a beautiful win tonight.”