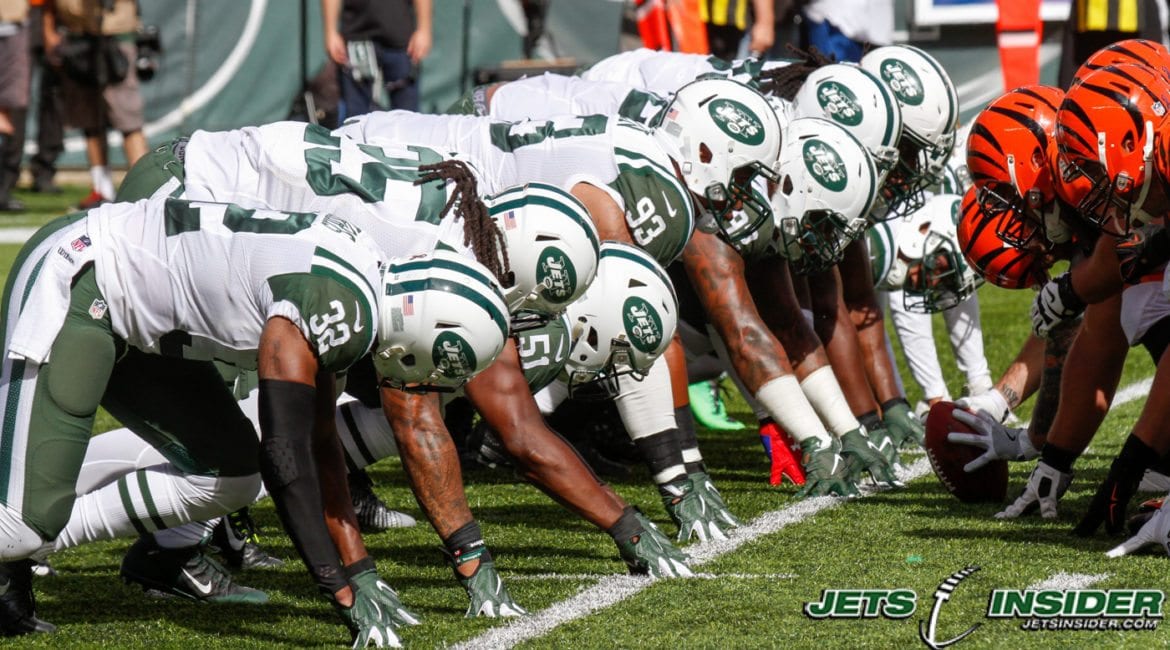 With the release of Muhammed Wilkerson, the New York Jets will have a difficult time improving their pass rushing defense that finished 28th in the league in 2017. Three years ago, the Jets had one of the most powerful defensive lines with Sheldon Richardson, Muhammed Wilkerson, Leonard Williams, and Damon Harrison. New York’s pass rush defense in 2015 was ranked 12th in the NFL. This season, Leonard Williams and Steve McLendon will have to carry the defense up-front, which is a base 3-4 scheme. Jets Training Camp begins this weekend and the search will begin for the next starting defensive linemen who will join Williams and McLendon to complete the team’s starting defensive line. Gang Green currently holds 10 total defensive linemen on the roster while the defense had six linemen at the start of the 2017 season. Here are some predictions as to which players will make the final roster/practice squad and where they will fall on the depth chart.

With all the big names that proceeded him gone, Leonard Williams is now the face of the defensive line. Williams will be entering his fourth-year with the Jets and has already shown promise to not only be the face of the defensive line, but the face of the entire defense. At a height of 6’5 and weight of 302 pounds, William’s big body will help this defensive line cover up holes against the rush. For his size, he is fairly agile and quick on his feet, so he poses a major threat to opposing quarterbacks on the pass rush. In 2017, Williams did not have the best season of his career as he only recorded two sacks, 22 tackles, and one interception in 16 games. Nonetheless, the Jets did pick up of his fifth-year option, meaning he will be with the Jets until 2019. Williams will return as one of the starting defensive ends this season and fans can expect him to show improvement from last season.

McLendon enters his third season with New York and his ninth season in the league. As the oldest veteran of the defensive line, McLendon has a tremendous amount of experience playing in the NFL with 106 games under his belt. He was a member of the Pittsburgh Steelers for six seasons where he played in the 3-4 scheme under Mike Tomlin. McLendon has shown to have a big voice in the locker room and if he can translate that onto the field, he will provide the necessary leadership skills to the younger members of the defensive line. He stands at 6’3 and weighs 310 pounds which gives the Jets another big body up-front; as a result he is especially effective in cutting down the run up the middle against opposing running backs. The 32-year-old finished last season with 1.5 sacks and 30 tackles and started 14 out of 16 games. For the 2018 season, expect him to be the starting nose tackle where he will play all 16 games, unless he suffers an injury.

Anderson was acquired by the Jets via trade with the Indianapolis Colts. On the third day of the draft, the Jets traded a seventh-round pick for the defensive end who will most likely have a big role with Gang Green this year. He has three years of playing experience with the Colts and last season he started eight of the nine games he appeared in. He is prone to knee injuries having suffered injuries in his junior year of college and his rookie year in the NFL. His 2017 season was cut short due to a laryngeal fracture but he has made a full recovery for the upcoming season. Anderson is 6’6″ and weighing 300 pounds, he has the tallest height on the defensive line.  The 26-year-old posted two sacks, 15 tackles, and a forced fumble with Indianapolis last season. With his prior starting experience, Anderson will most likely be the number one candidate to earn the job as the second starting defensive end playing alongside Steve McLendon and Leonard Williams for the 2018 season. His health will be a concern for the coaches.

Upshaw was invited to Jets minicamp for a try out and as result was offered a contract with the team. Besides Steve McLendon, Courtney Upshaw is another experienced player that will be joining the Jet’s defensive line this season. Upshaw is bit smaller compared to the other linemen – 6’2″ and weighs 272 pounds – but his experience makes up for his smaller stature. He was a member of the Baltimore Ravens from 2012-2015 and most recently with the Atlanta Falcons from 2016-2017. He has also played in one Super Bowl with each team, winning with the Ravens in 2012. Last season in Atlanta, Upshaw played in 13 games, but started in none; he had five tackles, one sack, and one forced fumble. In his career, he has started in 56 games so his experience will factor in the competition with Henry Anderson for a starting role. However, since Upshaw only started in five games in the past two seasons, the Jets may look to give the last starting defensive end position to an up and coming player like Anderson. If Anderson does suffer from injury problems again, expect Upshaw to take his spot. For now, Upshaw will remain as the third defensive end on the depth chart.

In February of 2017, Pennel was claimed off waivers by the Jets and was a terrific depth addition by General Manager Mike Maccagnan. Prior to joining the Jets, Pennel had been a member of the Green Bay Packers for three seasons. In his first season with the Jets, Pennel recorded 20 tackles and no sacks. He played in all 16 games and started three of them. He is 6’4 and weighs 332 pounds so his large frame is helpful since he plays nose tackle on the defensive line. This past March, Pennel signed a three-year contract to stay with the Jets. He will once again have a depth role playing as the second nose tackle in the depth chart behind McLendon. When Kacy Rodgers decides to mix up his defensive schemes to include a 4-3 front, expect Pennel to be starting next to McLendon.

In the 2018 Draft, Nathan Shepherd was drafted in the third-round by the Jets with the 72nd pick. He played football at Fort Hays State, a Division II school. Shepherd is 6’5″ and weighs 315 pounds and scouts have praised his size and movement skills. He has a quick jump off the snap and will only get better as he matures. The one issue scouts worry about is how he will transition to the NFL after playing at a Divison II school. Shepherd notched 38 tackles and four sacks during his senior year and was named to the Senior Bowl. With teammates Leonard Williams, Courtney Upshaw, and Henry Anderson as his mentors, he looks forward to a good deal of knowledge transfer and in time he should grow to become a pivotal player on the D-Line. Shepherd should be the fourth defensive end on the depth chart come September.

Cooper joined the Jets midway through the 2017 season when he was released by the 49ers. He had a depth role with New York and appeared in eight games registering four tackles, one sack, and one pass defend. He didn’t have a lot of time to prove himself with the team but did perform well in his depth role. The 6’4″, 300 pound Cooper, re-signed with the Jets in March in hopes of making the Jets squad come September. However, if the Jets need room for other positions, Cooper could be a likely candidate to be cut by the team.

Fatukasi was drafted by the Jets with 180th pick, in the sixth round of the 2018 NFL Draft. He played four years at UConn and appeared in all 11 games for the Huskies each season. He is 6’4″ and weighs 315 pounds, so he has the definite size to be an NFL caliber defensive end. Scouts agree that he is a powerful player for his position and that he treats every rep as if it was his last. However, scouts also agree he isn’t very quick ,doesn’t have great balance and lacks lateral agility while working outside the box. Fatukasi most likely will end up as a member of the practice squad once preseason ends but will given a chance in the future to earn a starting position on the defensive line.

Thomas was signed by the Jets in April after he went undrafted in the 2018 Draft. Coming from Texas Tech, he played two years with the Red Raiders and became a big part of their defense during his senior year. In 2017, he started 13 out of 13 games and notched 25 tackles, two fumble recoveries, one sack, one interception and one defended pass. He was a nose tackle at Texas Tech where he played and became familiar with the 3-4 defense. He has the perfect size to play nose tackle weighing 325 pounds, but he is a bit short at 6’2″. He proved he was able to stop the run gap at Texas Tech and seems like he has potential to be a work horse.  Fans can expect him to end up on this year’s practice squad. In front of him at the nose tackle position are McLendon and Pennel but if either one of them gets injured, Thomas will most likely be moved from the practice squad as a replacement. All eyes are on Thomas this preseason since he will be a project for Head Coach Todd Bowles.

Jets Add Two Wrs And A Guard In Fourth Round, Live Blog Favres Debut Contd, A Personal Take On The Revis Uproar And Other Notes From Camp, Final 53 Cuts And Signings Tracker, Morning After Report The Good Bad Ugly, Rex Wont Give Up On Top 5 Defense, Rocky Conditions Edwards And Catanzaro Say Think Again, Round One Tight End Options