JetsInsider.com > News > Blogs > On first rodeo, Jets’ rookie RB soaking it all in

On first rodeo, Jets’ rookie RB soaking it all in 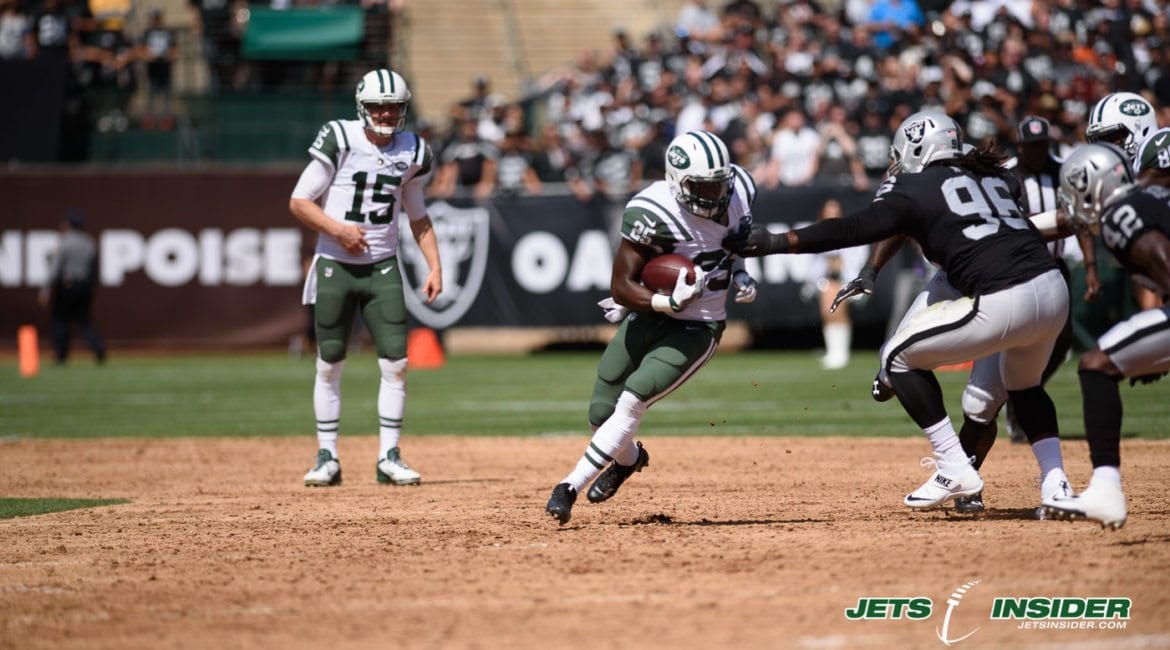 Elijah McGuire paused and smiled as he sat in his locker. He took a second to think about what the first two weeks of his professional football career has been like, despite two disappointing losses for his team, and what it’ll be like going up against a strong defensive line on Sunday afternoon.

“It’s crazy because I’ve been watching [Ndamukong] Suh for a long time,” McGuire said. “This guy, he never takes a play off. He’s a man. He’s a very great player. I’m just interested how this game is going to go.”

That was McGuire’s “pinch me” moment.

“This is my first rodeo as an NFL player,” he said. “I’m just playing the backseat role but at the same time, I’m always preparing like a starter so whenever my number is called, I’ll be ready to go.”

That’s the proper mindset for a rookie running back in this league. Nothing is guaranteed. McGuire knows it. The running back is looking at this opportunity to get his feet wet, watch film and get better from it. He knows the mistakes will come, especially as a rookie, but is mentally strong enough to live, learn and focus on the next week.

Sitting behind veterans Matt Forte and Bilal Powell certainly helps. The two have a combined 17 years of experience for McGuire to lean on. He insists they’ve been the big brothers every rookie needs coming into the league.

“I’ve learned a lot from Matt and Bilal. Coming in, they always gave me that little brother talk. The rights and wrongs, the dos and don’ts,” McGuire said. “They tell me the things I should do and shouldn’t do and how and where I can beat my opponent.

“I’m just like a sponge, just soaking everything in that they tell me. I focus in the classroom, write down notes and then take it to the field. It’s great playing under those guys.”

McGuire turned some heads in the preseason. On 18 carries, he rushed for 86 yards. It’s the reason he cracked the regular season roster. With Forte not getting any younger, McGuire’s presence was needed in the running back room. His downfield speed is electric, a main reason why he racked up over 4,000 career yards with the Ragin’ Cajuns in college. The running back’s compact frame helps with ball security and he is athletic enough to see a hole and burst through it.

Don’t be surprised if you see McGuire getting more touches as the year goes on. Running backs coach Stump Mitchell may put in a good word with John Morton and Todd Bowles if he continues to show progress.

“Coach Mitch coaches very hard,” the rookie admitted. “He just wants the best out of you. He’s doing a great job with this running back group, just getting the best out of us. I respect him so much. He’s always telling us: ‘You’re going to be good, we’ve got a long season to go, we’re heading in the right direction.’ He’s a great man.”

Sunday will be a test. McGuire has watched Suh a long time. He knows what Suh can bring on gameday. But, he’s confident his offensive line – a unit that will be without right guard Brian Winters – can handle a stout Miami front. After all, they performed relatively well against Khalil Mack last week. In addition to that, he’s practiced against Muhammad Wilkerson and Leonard Williams all summer.

“We need those guys to get us better [as a unit],” McGuire said. “They need us to get better. It goes hand-in-hand. That’s what we’ve been doing. We just have to build from our mistakes and move forward.”

If and when McGuire touches the ball on Sunday, he’ll be staring into the eyes of someone he’s watched on the television for years. On Sunday, the rodeo becomes a reality once again. He’s been studying his “tail off” in preparation. There are no days off for this running back.